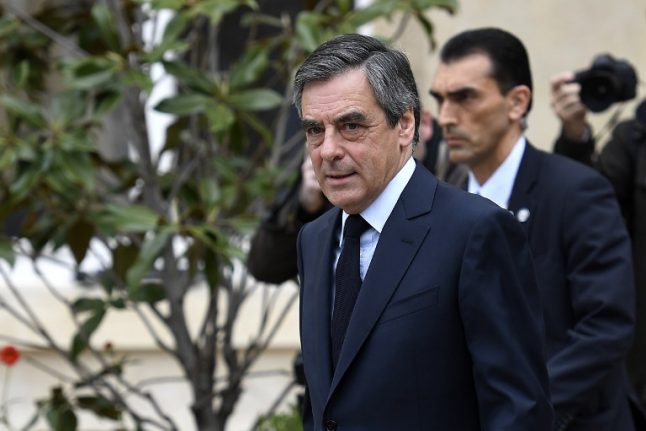 All photos: AFP
Fillon, 63, once the odds-on favourite, crashed out in the first round of the two-stage election on Sunday, placing third behind centrist Emmanuel Macron and far-right candidate Marine Le Pen who go through to a runoff.
The former prime minister was dogged by accusations that he paid his Welsh-born wife Penelope to act as a parliamentary aide — with little work to show for a salary of up to 10,000 euros ($10,900) a month.
Other allegations have piled up, including that he accepted gifts of luxury suits from a wealthy benefactor.
The scandal, dubbed “Penelopegate”, nearly derailed Fillon's campaign in early March when he came under intense pressure to allow conservative elder Alain Juppe replace him in the race.
The investigative weekly Le Canard Enchaine first broke the story in late January, and Fillon was charged on March 14 with misuse of public funds over the affair.
While employing a family member as a parliamentary aide is not illegal, Fillon has failed to convince investigators that Penelope earned her salary.
Her overall earnings totalled more than €680,000 ($725,000) between 1986 and 2013. The word “Thief” is scrawled across a poster of Fillon.
'Give back the money'
If found guilty on those charges, Fillon could in theory be jailed for up to 10 years, fined a million euros and deprived of the right to hold public office for a number of years. A beneficiary of illegally-received public money can also be jailed for up to 10 years and face a fine of 750,000 euros.
Fillon bluntly denied any wrongdoing and claimed that Socialist President Francois Hollande created a “secret cell” to leak information against him — an accusation that gained little traction.
The candidate soldiered on with his campaign despite flagging poll numbers and heckling at rallies, such as “Fillon, crook” and “Give back the money”.
By the time voters went to the polls for Sunday's first round, Fillon had clawed back enough support to be in with a fighting chance.
But with around 20 percent of the vote he fell short of the mark, with Macron and Le Pen grabbing the two places in a second, decisive round of voting on May 7.
It was the first time since the establishment of the Fifth Republic in 1958 that the French right did not have a candidate in the presidential runoff.
Fillon, who is an MP representing Paris, will enjoy protection from prosecution until general elections set for June.
He has said he will not seek re-election in the lower house but may run for Senate. If he wins, he would again benefit from immunity while in office, as he would have if he had won the presidency.
On Monday he told the party he would not lead them into the legislative campaign, saying: “I need to rethink my life and heal my family's wounds.”
Penelope Fillon was grilled for more than 12 hours on March 28 when she was charged with complicity in the affair and concealment.
But her husband refused to answer questions when he was charged in March, arguing that he should not have to in the midst of campaigning.
In addition to the parliamentary jobs, Fillon has been charged over payments to Penelope from a magazine owned by a billionaire friend of his, Marc Ladreit de Lacharriere, and for failing to declare an interest-free loan from Ladreit de Lacharriere to a transparency watchdog.
Investigators have expanded the probe on suspicions that the Fillons altered documents to hide possible  double-dipping by his wife when she was working both in parliament and at the magazine.
They are also looking into possible influence peddling after the revelation — also by the Canard Enchaine — that Fillon accepted bespoke suits as gifts from a high-flying lawyer.
Fillon said he has since returned the suits and repaid the loan.