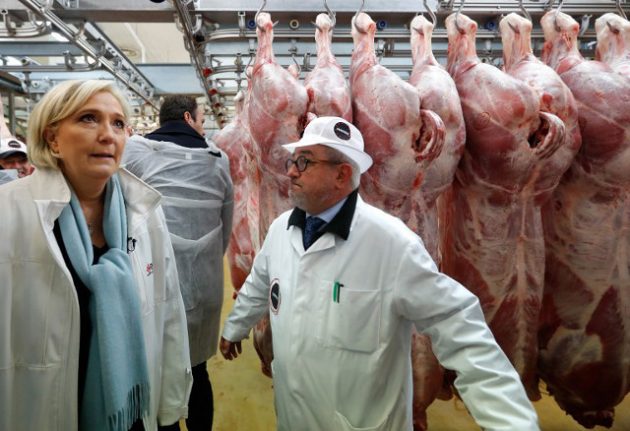 Marine Le Pen will go head-to-head with Emmanuel Macron in the second round round of the presidential election to determine who will be the next head of state in France.

The far-right National Front leader picked up a record 7.6 million votes in the first round of the election, but to have any chance getting elected she will probably have to at least double that figure.

There are voters out there she could win over.

If we just add up all the votes from the openly anti-EU candidates then in theory Le Pen could reach 46 percent of the vote.

But of course things are not as simple as that and the EU is far from the only thing that maters to the French electorate.

So where will Le Pen get her extra voters from? In spite of François Fillon's call to endorse Macron, around a third of his supporters are ready to back Le Pen, whilst another 20 percent may help her close the points gap on Macron by abstaining, Kantar Public pollster Edouard Lecerf told The Local.

For example former minister Christian Democrat leader Christine Boutin, who had backed Fillon, has called on voters to endorse Le Pen. She tweeted “voting for Le Pen doesn't mean subscribing to the National Front's ideas but it weakens Emmanuel Macron”.

National Front official named Julien Odoul told The Local: “Many of Fillon's supporters will back Le Pen. They share our values and their ideas are quite similar to ours on Islamic fundamentalism, immigration, work and national identity.”

“In my department, a majority of Fillon supporters will endorse Marine Le Pen”, said Odoul.

Bruno Cautres, a political analyst from the Cevipof think tank told The Local: “Fillon's electorate believes that society needs more order, this is a vision they share with Le Pen.”

But the problem for Le Pen, as Cautres points out is that they disagree on economic views.

“Fillon wants less regulation and Le Pen advocates for a redistribution of wealth in a nationalistic context. They also disagree on Europe,” he said. Jean-Luc Mélenchon is not a fan of either Marine Le Pen or Emmanuel Macron declaring “both wanted to undermine the most elementary social basics of the country”.

The hard-left firebrand was heavily criticized for not calling on his voters to help form a united “Republican Front” against the far right.

“Each of you knows in your conscience what your duty is,” was  all he told supporters.

The National Front are also quietly confident that they can convince fellow anti-establishment, anti-globalisation voters who backed Melenchon to jump across the political divide and back Le Pen in round two.

Le Pen would have to present herself as the champion of those who feel they have lost out to globalisation. She would have to make sure the next 12 days or so were dominated by the “patriots vs globalists” division that she presents as the major battle in France right now.

“The vast majority of them would never vote for Macron. Their views converge with ours on Europe, on the respect of popular sovereignty, on changing the establishment, and as Marine Le Pen is the anti-establishment candidate, they will vote for us”, he said.

However this is not what pollsters predict.

“Half of Mélenchon supporters would abstain and only 15 percent would  back Le Pen”, says Lecerf. What about the voters out there?

The National Front is confident that the 4 percent of the electorate (around 2 million voters) who voted for fellow sovereignist and anti-EU candidate Nicolas Dupont Aignan will switch to Le Pen without thinking.

“Dupont-Aignan's electorate is meant to back us,” said the National Front's Julien Odoul.

Dupont-Aignan has announced that he would decide who to endorse in the coming days, but the National Front's vice-president Florian Philippot has already called Dupont-Aignan to urge his supporters to vote for Le Pen in the final runoff.

Kantar public's Edouard Lecerf said: “Nicolas Dupont-Aignan voters constitute an important electoral base for the FN as over 50% of them will probably back Le Pen now.”

Another Eurosceptic François Asselineau gathered 0.9% of votes but hasn't given any voting guidelines to his supporters yet.

“Asselineau is pro-Frexit and his electors could easily find their place in our project, they want the system to change and so do we”, the National Front's Julien Odoul told The Local.

Perhaps the best way Marine Le Pen can increase her vote share is to hope that more voters abstain in the second round.

The abstention rate in the first round was 21.3 percent, far lower that everyone expected. But with many voters, especially those on the hard left and many on the right, not willing to back Macron, the abstention rate is set to be higher.

Complacency could also set in with many voters.

Polling day falls on a long holiday weekend meaning many voters may decide to go away, already convinced that Emmanuel Macron will be the next president.

Perhaps Le Pen should spend some of her campaign money buying them train tickets to the coast.

Le Pen has quickly started her bid to appeal to more to more voters by temporarily stepping down from the head of the National Front.

She has also begun launching the expected attacks on Emmanuel Macron, calling him weak on terrorism. She will no doubt fire everything she has at him over the next two weeks.

But it's still doubtful, although far from impossible that she will get to the magic 50 percent mark.

Who are the millions of French voters backing Marine Le Pen?