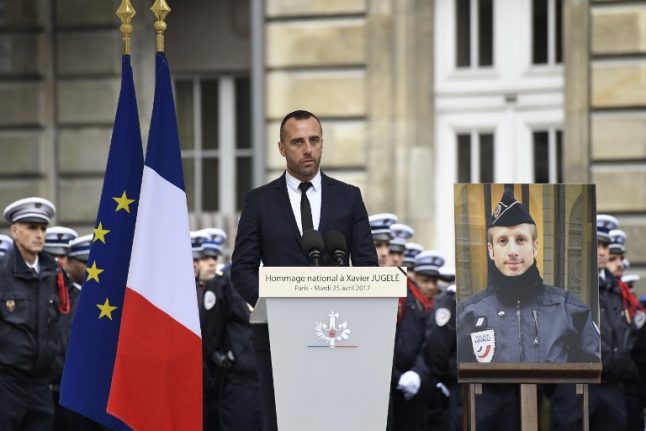 Etienne Cardiles, the partner of the policeman, speaks on Tuesday. Photo: AFP
Xavier Jugele, a policeman who was murdered on Thursday on the Champs-Elysées last week, was honoured at police headquarters in Paris on Tuesday.
Karim Cheurfi, a 39-year-old Frenchman, shot and killed police officer Xavier Jugele and wounded two others on the world-famous Paris avenue on Thursday, in an attack claimed by the Islamic State group. Cheurfi was killed in return fire.
The slain policeman was awarded one of France's highest honours and posthumously given the rank of captain. Etienne Cardiles, the partner of the policeman, told the gathered crowd that he had no hatred over the attack.
“I suffer without shame, you will not have my hatred,” he said.
He added that he had exchanged texts on Thursday with his partner about an upcoming holiday, adding that the policeman was pleased to be stationed on the Champs-Elysées that day because it represented “the image of France” for him.
“At this point, the worst happened,” Cardiles said.
“You will stay in my heart forever. I love you. Let us live with dignity and defend peace.”
Shortly after Jugele's death it emerged that he had been among the first responders at the Bataclan theatre in Paris on November 13, 2015, where Isis gunmen massacred 90 concertgoers.
He returned to the venue a year later when it reopened for a concert by British star Sting, telling a BBC interviewer he wanted “to celebrate life and say 'no' to terrorism”.
Jugele was the fifth policeman slain by jihadists in attacks that have claimed more than 230 lives across France since January 2015
Also present at Tuesday's ceremony was president Francois Hollande, who called the fallen policeman “an everyday hero”.
Presidential candidates Emmanuel Macron and Marine Le Pen were also on hand.