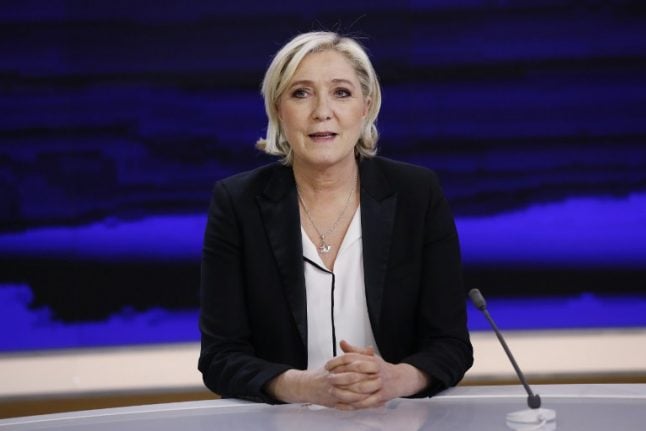 All photos: AFP
Le Pen said on Monday night that she was setting party affairs to one side, at least temporarily in order to concentrate on the campaign.
“So, this evening, I am no longer the president of the National Front. I am the candidate for the French presidency,” she said.

“I will feel freer, I will be above partisan considerations, it's an important act,” Le Pen told France 2 television.
She attempted to distance herself from her competitor, centrist Emmanuel Macron, by suggesting she has a stronger love for France.
“Nothing in either Mr Macron's policies or his behaviour suggests the slightest proof of love for France,” and insisted, “We are going to win.” Le Pen, who has been hoping to emulate Donald Trump's victory in the US, said the French faced a choice between “runaway globalisation” and a protectionist France.
Her plans to restore France's borders with its European neighbours, pull out of the eurozone and hold a referendum on leaving the EU had sown fear of another devastating blow to the bloc after Britain's vote to leave.
The euro and European stocks rose Monday, buoyed by expectations that Macron is the hot favourite for next president.
Le Pen gained over 1.2 million new voters compared with her last presidential bid in 2012, securing 7.7 million ballots, a result she hailed as “historic”.
But her share of the vote was far below a March poll high of 27 percent.
She follows in the footsteps of her father Jean-Marie, who made it through to the 2002 presidential run-off in what was a political earthquake for France.
Le Pen senior went on to suffer a stinging defeat when mainstream parties closed ranks to keep him out.
Sunday's first round capped a rollercoaster campaign in a demoralised France, which has been rocked by a series of terror attacks since 2015 and is struggling to shake off a deep economic malaise.
READ ALSO: Macron vs Le Pen: A deeply divided France set for an almighty collision