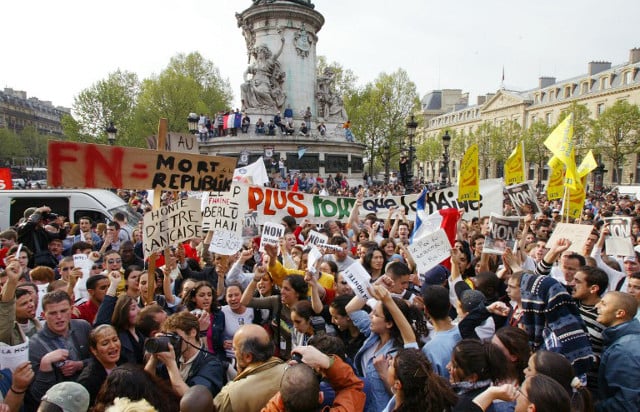 The realization that a man who was considered openly racist and anti-Semitic had qualified for the second round of the French presidential election prompted tens of thousands of French voters to immediately take to the streets to express their shame.

Up to two million people  marched again across the country days later on May 1st (see video below).

There was a spontaneous outpouring of anger followed by soul-searching and then a mobilisation to do everything to block Le Pen’s path to power.

And it worked, with Jean-Marie Le Pen going on to be trounced in the second round on May 5th.

On Sunday night the protests were limited to some hardcore anti-fascist and anti-capitalist groups who made their displeasure known mainly by attacking police and banks.

But why wasn’t there the same nationwide spontaneous mobilisation on Sunday night after Jean-Marie’s daughter Marine Le Pen, the current leader of the National Front, picked up a record 7.5 million votes to follow in her father’s footsteps?

Mainly because it wasn’t a shock to anyone in France. In fact it would have been a shock if Marine Le Pen hadn’t made it to the second round.

READ ALSO: Analysis: France is now in uncharted territory and the journey is just beginning She has been performing strongly in first round votes ever since the 2012 presidential election in which she secured over 18 percent of the vote. Then in local, European, departmental, and in the December 2015 regional elections, Le Pen also topped the vote.

She claimed the National Front was the number one party in France and no one could really argue with her.

But the country has also got used to her losing in the second round. Polls already suggest she has little chance of becoming president.

But in 2002 Jean-Marie Le Pen’s run to the second round came completely out of the blue, thanks largely to a record abstention rate and the squabbling Socialists being in disarray.

No one really considered that the then Socialist candidate Lionel Jospin would not make the second round.

But in 2017 polls had been telling us for months that Le Pen was almost guaranteed her place, ahead of the Socialist candidate who in the end was Benoit Hamon. Beating the rightwing candidate François Fillon was an added bonus.

READ ALSO: Why Marine Le Pen's voters thought she was the best candidate

Another reason why the shock and anger levels were low on Sunday was that Le Pen’s final score was actually lower than expected. She picked up around 21.4 percent but at one point had polled as high as 27 percent.

So despite the historic performance, even her own supporters were disappointed to finish in second place behind Emmanuel Macron.

The other factor is that there is no longer the same taboo around Marine Le Pen as there was with her father.

While he has been convicted numerous times of hate speech and Holocaust denial his daughter has successfully softened her image in the eyes of many.

While many among France’s older generations will still see her and her party as a danger, many young people in France are voting for her.

RESULTS: Full breakdown of how France voted in the first round

She has successfully widened her appeal to portray herself as the people’s champion and the candidate who will fight for France’s working classes against enemies such as globalisation and free trade as well as immigration.

Her rise is also part of a global rise of populism, which helps put her in context, whereas he father was considered an embarrassment and a pariah for France.

The reaction to Le Pen’s place in the second round was very different to 2002. While Jacques Chirac gave a solemn speech about the danger facing France, Emmanuel Macon, the other “finalist” gave a triumphant speech focusing mainly on himself.

Macron has also agreed to a live TV debate with Le Pen, unlike Chirac who refused to meet with her father. Macron would be blasted for cowering in fear if he chose that option. Despite what she might say Le Pen is now part of the French political establishment. Liberation newspaper, whose famous “Non” front page back in 2002 is still remembered, did not feature a Le Pen in Monday's edition, but instead focused on Emmanuel Macron.

And while there may be no marching just yet, there have been numerous calls by politicians, celebrities Muslim leaders, and police unions for people to vote against Le Pen.

However, if Le Pen actually wins on May 7th and becomes France’s head of state, don't expect the streets to clear. Those anti-National Front instincts will likely propel thousands to march. The police have even warned of rioting.

It’s just that, for the moment, no one believes her winning is a real risk.