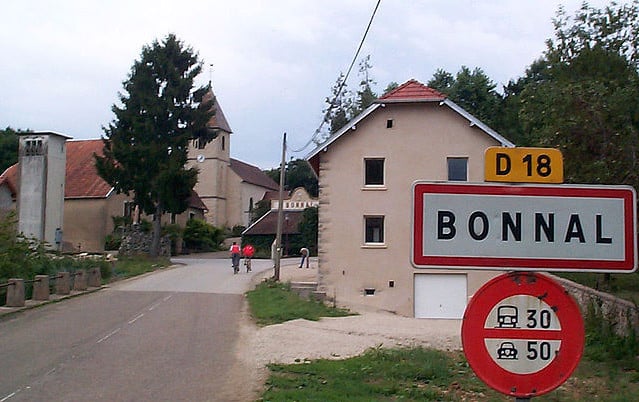 Bonnal in eastern France, where none of the 22 voters picked Le Pen. Photo: TracksonWax/Wikimedia

The map below shows a zoomed out version of the map (so not all 56 points may be fully visible) displaying the villages, all under 100 inhabitants strong, where not a single box was ticked on the ballot paper for Le Pen.

It shows two clear clusters of non-Le Pen voting villages, one large group in the south-west, and another tightly packed group of FN-shunners between Grenoble and Marseille.

The rest are spread across the east and north, creating a crescent of Le Pen no-go zones. So who was their preferred candidate instead?

The difference between the clusters is that while the villages in the south and Corsica largely picked Jean-Luc Mélenchon or Emmanuel Macron over Le Pen, many of the villages to the north and east chose rival right-wing candidate François Fillon.

All five of the villages in the north of France chose Fillon, the largest being Saint-Valery, a commune of 58 voters on the Somme bay, and the smallest being Canteleux, a hamlet of just 13 voters.

One of the smallest villages in the southern clusters, Cabous in south-west France, only had 16 people signed up to vote, of which the biggest group voted for Jean-Luc Mélenchon. One of the biggest villages was Samaran, with 72 voters situated between Toulouse and Pau, which shunned Le Pen in favour of Macron.

None of the villages were found in Le Pen's stronghold of the Provence-Alpes-Côte d’Azur (PACA) region, where her father Jean-Marie Le Pen built up support in the 1970's. But there were some Le Pen voter free villages in France's far north, another National Front key area.

Here's a map of how all the communes in France voted. Though you'll need a magnifying glass to spot your commune. READ ALSO: Who are the eight million French voters expected to back Marine Le Pen?