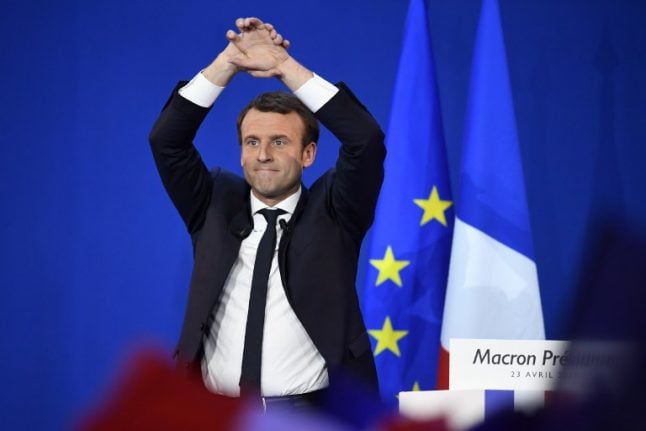 Pro-Europe centrist Emmanuel Macron vowed Sunday to battle the “threat of nationalists” after results showed he would face far-right leader Marine Le Pen in the run-off of France's presidential election next month.

Thousands of supporters waving French flags shouted in ecstasy as Macron and his spouse, Brigitte Trogneux — his former teacher who is 25 years his senior — took to the stage.

To chants of “Macron president!” and “We're going to win,” Macron began his speech by paying tribute to his opponents, and praised his supporters for his lightning rise.

“I want to be the president of the patriots against the threat of nationalists,” the 39-year-old former banker told hundreds of flag-waving supporters.

“In your name, I will be… the voice of hope for our country and for Europe,” said Macron, who had never before stood for election and only started his centrist movement 12 months ago.

He will meet Le Pen in the May 7 second round.

Opinion polls released after the first-round showed the pro-business moderniser would easily beat Le Pen, who has hardened her anti-immigration and anti-Europe rhetoric over the last week. The French vote on Sunday was being closely watched as a bellwether for populist sentiment following the election of Donald Trump as US President and Britain's vote to leave the EU.

Macron and Le Pen have together ensured that for the first time since the war neither the left nor the right will be represented in the second round run off vote.

Macron vowed to unite voters to ensure he would become the youngest president of France.

“I will work over the coming fortnight so that together we can gather as many people as possible around my candidacy,” he told cheering crowds.

“The strength of this coming together will be decisive for government. The challenge this evening is not to vote against a person, but to decide to break completely with a system that has been incapable of responding to our country’s problems for 30 years.”

Macron's rise has been phenomenal given he only formed his movement a year ago. Many judged his bid for the presidency as a “crazy gamble”.

“To all those who have accompanied me since April 2016, in founding and bringing En Marche! to life, I would like to say this: in the space of a year, we have changed the face of French political life,” he told supporters.

Those ecstatic crowds who had waited to hear him speak at Porte de Versailles in the south of Paris cheered his every word.

Most were confident of winning the second round against Le Pen.

“I'm in no way worried, I'm am certain Macron will win”, Florent, a 30-year-old consultant, told The Local.

A 35-year-old lawyer Yves-Justice Djimi told The Local: “In a second between Macron and Le Pen, most of the right and most of the left would support Macron. His strength is that he is unifying.”

But other voters did not want to celebrate judging the presence of Le Pen in the second round to be cause for worry.

“Knowing that nearly 22 percent of the French voted for a huge xenophobe is a source serious concern,” 40-year-old Adina L told The Local. At the FN's electoral headquarters at Henin-Beaumont in northern France's rundown industrial belt, there were similar scenes of celebration.

When news that Marine Le Pen would advance to the second round of France's presidential elecition and the room broke out into cheers, chants, and manic flag waving. The Marseillaise was sung.

Le Pen, 48, wants France to quit the eurozone, restore border controls and stage a referendum on leaving the EU.

“The first step… has been taken. This result is historic,” she said, declaring it “time to liberate the French people”.

Le Pen's critics accuse her of sanitising the image of Islamophobia, anti-Semitism and racism associated with her firebrand father.

Many Le Pen supporters who The Local spoke to knew they would be up against it.
“I'm happy with these results but I was expecting a different score… but as long as she is through it's a good thing,” said Louis, an 18-year-old student.
“But we are scared that people will block her in the second round.”
Those calls to block Le Pen went out immediately. One of the first to issue the call to “block extremism” was the defeated candidate François Fillon.
“I will vote for Emmanuel Macron,” said the candidate who only months ago was considered a shoo-in for the presidency.
So what can we expect in the battle between Le Pen and Macron?
This is the scenario Le Pen especially would choose to face and has already dubbed it “patriots vs globalists”. Expect her to play on this division.
Le Pen vs Macron is being seen as a battle between old France and new France, “resignation” vs “optimism”, a closed country vs an open one, protectionism vs globalisation, a “free and independent France” versus a France that is an integral part of Europe.
Macron says Le Pen wants to take France back to the 1950s while he wants to pull it into the 21st century.
Le Pen says “Islamism would be on the move” under a Macron presidency where as Macron accused Le Pen of making enemies out of France's Muslim population.
Everywhere you look there are clear battle lines. While everyone has talked of undecided voters, there presumably wouldn't be many if this pair went head to head.
There may be abstentions though. True leftists from Mélenchon and Hamon's camp may not be able to bring themselves to vote for pro-business Macron. Hardcore Republican supporters will also find both candidates unappealing.
Marine Le Pen will do everything in the next two weeks to present Macron as a threat to France and its identity and culture.
Macron probably just has to hold his nerves over the next two weeks. After that he will likely have five years to try to prove he his not a threat to a France but a solution.
It won't be easy.