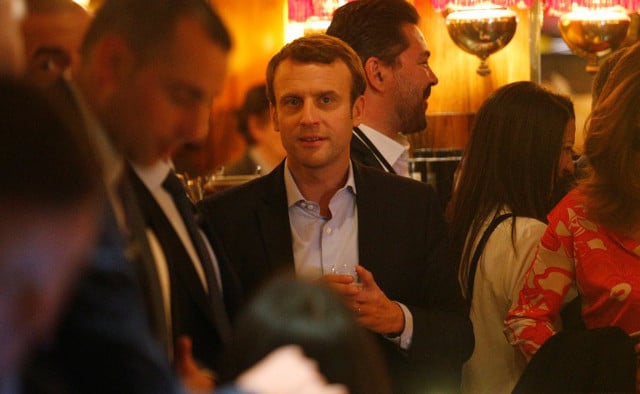 Photo: AFP
After topping the polls on Sunday night, Macron was seen celebrating, surrounded by a few celebrities and aides at a private party at renowned Paris bistro Montparnasse, La Rotonde.
Commentators have suggested that Macron's preemptive festivities echo Nicolas Sarkozy's infamous night at Fouquet's, another top Paris restaurant, when he celebrated winning the 2007 presidential election.

Sarkozy's night was attended by a host of business elites and the guest list even included singer Johnny Hallyday and France's richest man Bernard Arnault. The event is so well known in France that the night even has its own Wikipedia page.
Macron would do well to avoid associations with Sarkozy's celebrations, because Fouquet's was seen as a key moment when the public mood began to turn against him. Sarkozy leaving Fouquet. Photo: AFP
Macron however vehemently defended the evening at the bistro, claiming it was with “security guards and secretaries”, not bankers or celebrities.
He said it was a “moment of the heart” to thank his staff, but it came not long after a victory speech to supporters that many criticized as being like that of an elected president.
He deserves the benefit of the doubt but coming across as smug and triumphant won't help Macron's image among many who already see him as part of the political elite.
No doubt, making it past the first round, with a strong chance of winning the second, is an achievement for political newcomer Macron. But he only has to look over his shoulder to see a strong night for the National Front too, only a couple of points behind.
Many on Twitter pointed out that a historic breakthrough for the National Front, a party long reviled by many in France, was no cause for anyone to celebrate.
It represented the biggest success for the extreme right in France since 2002 when Jean-Marie Le Pen unexpectedly made it past the first round. Photo: AFP
And although Macron is looking unbeatable for the second round, predicted to gain 66 percent against Le Pen's 34 percent of votes, his problems won't be over if he gets to the Elysée Palace.
As a new independent party, En Marche! is far from guaranteed a majority in parliament, without which it will be very difficult for President Macron to pass all the reforms he's got planned.
Macron and his En Marche! movement have overcome the first hurdle but there are many more hurdles he will have to negotiate in the weeks and indeed years ahead.
Macron has to somehow pay those voters back by rejuvenating and reforming France as well as somehow heal its divisions. He can expect obstacles and protests all along the way.
This is not a time for Champagne, but for strong coffee.
By Rose Trigg