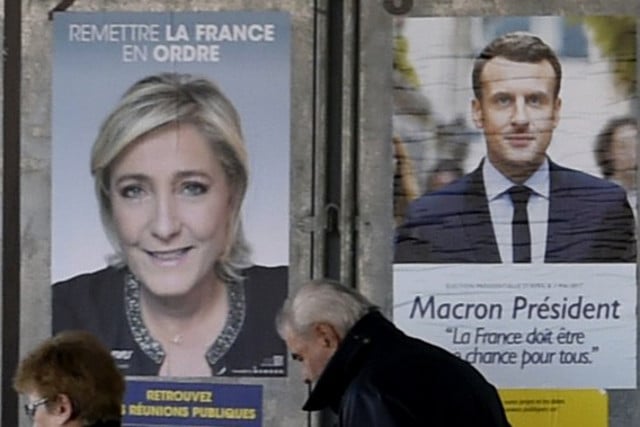 In the end, the sun came out and the French, despite the predictions, turned out in good numbers (around 77%) to vote in the first round of the presidential election. What is more, they voted into first place, not Marine Le Pen, but Emmanuel Macron, by around 24% to a shade under 22% (at the time of writing the final scores have not been announced).

For Le Pen, there has been no Trump effect, but rather a Wilders effect: the far-right hasn’t done as well as expected. Le Pen has often complained that opinion polls are inaccurate and misrepresent her score, but not in the way she thought. And suggestions that she might even get as high as 30% (Russian opinion polls?) have proved to be utterly unfounded.

While the 23rd April 2017 will go down as a historic moment for the French far-right, for Le Pen and within the FN, it’s a disappointment.

She wanted to go into the second round in pole position, using that as her platform to denounce ‘the system’ for preventing the ‘real’ voice of the people from being heard, even though she knew that she had little chance of beating either Macron or the right-wing candidate, Francois Fillon. Instead she has herself only seen off Fillon by 2%.

Macron’s achievement is quite something. He has not only won the first round, but also withstood last-minute surges from Fillon and the far-left candidate, Jean-Luc Melenchon. Both men appeared really to believe they would be in the second round, but then no candidate admits defeat before the fact (except Benoit Hamon, that is).

Throughout the last week of the campaign, the pro-Fillon Le Figaro banged out the message for right-wing voters who might have been thinking of a tactical vote for Macron. But to no real effect. By the end of Sunday evening, Fillon was just under 20% of the vote and Melenchon just over 19%.

Benoit Hamon, the Socialist party candidate, finished a distant fifth, with less than 7%, leaving the party with a major headache in the lead up to June’s general elections.

Do they try to find some sort of alliance with Melenchon? Will he even be looking for that? Or does the PS rally around another figure (maybe prime minister Bernard Cazeneuve) in a broad pro-Macron coalition (if he wins)? On Sunday evening, Melenchon was in no mood to hint at how he envisaged the course of events over the next few weeks.

Hamon was quick to endorse Macron for the second round and Filon followed suit. This matters.

Candidates who are eliminated in the first round do not have to call on their electors to vote for one candidate or another in the second round.

They may even seek to play a waiting game and to cut a deal with one or other of the candidates ahead of the second round. Francois Fillon, to his credit, made an immediate and unequivocal call to his supporters to vote for Macron and against Le Pen.

The gesture was dignified, but also opens the way for dialogue between the Republicans and Macron for the future. Not all right-wingers are entirely happy with Fillon’s rapid declaration – the acting chair of the party, Laurent Wauquiez was reluctant to commit himself – but most of the party’s leading figures have echoed Fillon.

Whether Fillon’s electors will follow suit remains open to doubt. A large part of the Catholic right, those who made up the numbers who appeared in the Place du Trocadero in early March to support Fillon, will find it difficult. Similarly, a large slice of Melenchon’s supporters, who see Macron as one of the primary advocates of the ‘uberisation’ of the French economy, will find Le Pen’s rhetoric more appealing and cast a vote for her to teach ‘les elites’ a lesson, if they vote at all.

Macron still has to win the election on May 7th. The opinion polls that have explored the possibility of a Macron-Le Pen run-off have generally seen this going 60-40 in his favour (as opposed to 55-45 in a Fillon-Le Pen contest).

That would be a good outcome, but of course, Macron will want to limit Le Pen as far as possible, not just to beat her fair and square, but also to afford himself leverage in future negotiations between his own En Marche! movement and the other parties.

We always knew that this election would take France into uncharted political waters. This is only the first stage of the process, but it is a fundamental one.