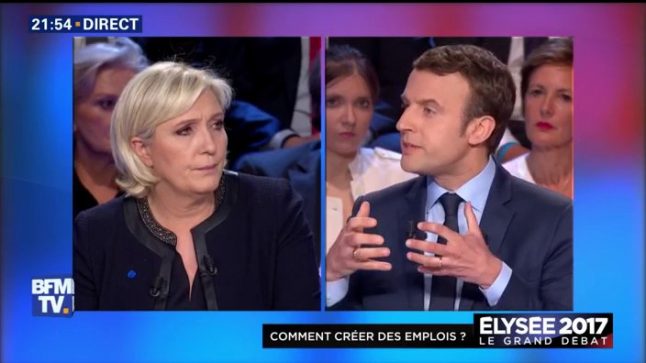 Macron gave a triumphant speech to his cheering supporters on Sunday night and who could blame him given that he was written off as an upstart and a dreamer just a few months ago.

But some have criticized Macron for giving the impression he believed he was already president.

2/ In such a difficult, fraught election, the victor, even in such spectacular circumstances as Macron, must show restraint.

To make matters worse the 39-year-old former banker went on to celebrate with close aides and a few celebrities in a swanky Paris bistro. The evening was compared to Nicolas Sarkozy’s infamous election night soiree at the chic Fouquets restaurant on the Champs-Elysées after his 2007 election win. Things quickly went downhill for Sarkozy from there and he ended up one of the most unpopular presidents in French history.

Macron defended his soirée and dismissed comparisons to Sarkozy, but nevertheless it didn't give leave a positive impression on many news sites, let alone voters.

But even when he is crowned president on May 7th, as he surely will be, he would be wise not to celebrate too much either.

He still has to win a majority in parliament or at least a working coalition that would allow him to govern (see below). And then more importantly he has to set about healing divisions in the country that will be exposed even more in the next two weeks.

Time to get your head down Emmanuel.

2. Will there be a massive turnout to block Le Pen?

On Monday morning the hashtag #SansMoiLe7Mai was trending top in France. It literally means “Without Me on May 7th” and was uniting all those who say they will refuse to vote for the “fascist Le Pen or the banker Macron”.

“Between Le Pen, a racist and xenophobe, and Macron, who is about finance and free markets, it’s a choice between the plague and the cholera,” said French political expert Thomas Guénolé, when analysing the choice ahead for leftist voters.

It’s safe to say those anti-fascist, anti-capitalist protesters who clashed with police in Paris after Sunday’s results also won’t be joining the movement to keep Le Pen out of the Elysée. Macron is unlikely to benefit from the massive turnout that helped prevent Marine Le Pen’s father Jean-Marie from coming to power in 2002 when 82 percent of the population voted for Jacques Chirac.

Macron is expected to get around 66 percent against Le Pen's 32 percent.

Nevertheless Macron will have appreciated the numerous calls of politicians on the left and the right on Sunday night to back him against Le Pen.

Socialist candidate Benoit Hamon and conservative François Fillon, who both suffered their own humiliation on Sunday night, both called for voters to back Macron. So did President François Hollande.

Jean-Luc Mélenchon and other anti-capitalist defeated candidates however refused to join the chorus of anti-Le Pen voters.

3. Can Le Pen somehow pull off the shock to end all shocks? Let’s stick our necks on the line here at a risk of being humbled and say 'no'.

In Sunday’s first round Le Pen achieved a record score of around 7.5 million votes, but the reality is she would probably need to double that in the second round to become the next president of France.

Where will all those voters come from?

Polls before the first round said she could expect to pull in around 30 percent of François Fillon’s voters, who are more to the right and for whom the issues of identity and immigration are a priority.

She may also win over the 4.75 percent of voters who backed fellow sovereignist and anti-EU crusader Nicolas Dupont-Aignan and the 0.9 percent who went for Eurosceptic François Asselineau.

But it won’t be enough.

On Monday one of Le Pen’s campaign chiefs Steeve Briois, the far right mayor of Henin-Beaumont, talked of wooing France’s other group of anti-establishment voters, namely those on the far left who voted for Jean-Luc Mélenchon and other anti-capitalist candidates.

“Those who voted for Mr. Mélenchon are angry voters,” Briois said. “They can be in agreement with us.”  He added that they express a choice “outside the system.”

While Melenchon’s and Marine Le Pen’s economic programmes have similarities in that they are designed to favour the beleaguered working classes and both are anti-EU, anti-globalisation and pro-Russia, the National Front is still seen as a racist, xenophobic party for many on the far left – and therefore a no-go zone.

While many of Le Pen’s voters used to be Communist supporters it is unlikely she can persuade enough anti-establishment leftists to back her in the next two weeks.

Hamon supporter Yves Lechermeier told The Local on Sunday: “For us Macron is the worst candidate to run against  Le Pen. I will definitely vote for him but do so with disgust.”

Her only hope would be to achieve 50 percent of the vote thanks to a mass abstention on the left. Many have pointed out the weekend of May 7th is a long holiday for the French. Will French voters head off on holiday thinking there's no danger and come back to the shock of a Le Pen victory? 4. And what about the third round of the presidential election?

Of course it’s not all over in two weeks time even if Macron seems nailed on to become the next French president.

In fact May 7th will likely be the easy part for him and his new movement En Marche!

Macron must then go on to the “third round of the presidential election”, otherwise known as the legislative elections of which there are two rounds.

He will go looking for a majority and has vowed to present candidates in each constituency. Currently he has zero. He will hope voters continue to put their faith in him.

He may have to try to strike deals with both the Socialists and the Republicans to try and get enough MPs ready to back his planned reforms.

Many think the most likely scenario is that the Republicans will go all out to try and achieve a majority in parliament and force Macron into what’s called “co-habitation”, meaning his Prime Minister would likely be from the right, rather than from En Marche!

And then? Well then Macron has to somehow set about rejuvenating and reforming France as well as somehow heal its divisions. The next two weeks could feel like a walk in the park compared to what he faces further down the line.