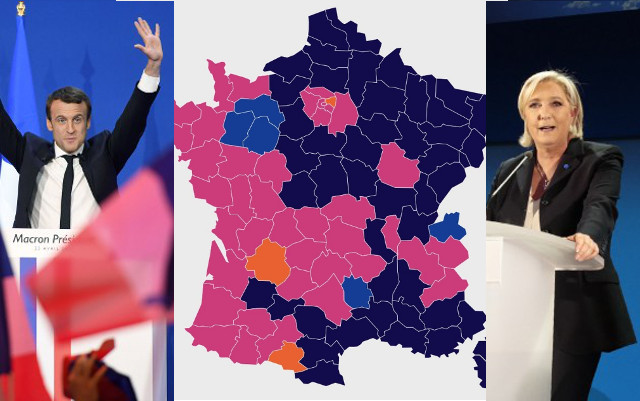 All photos: AFP
Here's a reminder of the first round vote share – centrist Macron brought in 23.75 percent of votes, ahead of National Front (FN) leader Le Pen on 21.53 percent, according to final results.
In other words, 8.53 million French people voted for Macron, compared to 7.66 million for Le Pen.
Where are the voters?
The map below, from France's Interior Ministry, shows a very divided France indeed. Pink denotes Macron's voters, mostly across the western half of France, but also in pockets of central France and in the east. He led in 42 departments overall.
He also well and truly won the Ile de France region, with 34.8 percent of voters in Greater Paris ticking his name.
Purple represents far-right Le Pen, who enjoyed her typical support from the north east and the south east, winning 47 departments. But she only pulled in 4.99 percent of support from Parisians in Ile-de-France, finishing fifth overall.
Below are the full results for the Greater Paris region.

As for Paris itself, here's how the residents of all 20 arrondissements voted. Macron was most popular, winning 13 arrondissements – mostly in the centre of Paris, but also in the north and south.
Francois Fillon won five arrondissements, all to the west, and Jean-Luc Mélenchon won the 19th and 20th to the north east. Map: Le Bo Bon. See more here.
Across France, here's how all the communes voted, according to a map from the Interior Ministry. The maps above don't tell the full story of the voters, however.
Closer inspection of the final figures show that Macron performed stronger in the big cities than Le Pen did.
He pulled in over 30 percent of the votes in cities including Paris, Bordeaux, Nantes, Grenoble, Rennes, Lyon, Strasbourg, Toulouse, and Montpellier.
He also aced the wealthy departments like Hauts-de-Seine and Yvelines in the Ile-de-France region.

Le Pen, on the other hand, performed best in the less densely populated areas, like Aisne, Ardennes, Meuse, Haute-Saône, Haute-Marne, Pas-de-Calais and Somme. Her only big city was Nice, in her south eastern stronghold.
What kind of people are the voters?
Geography aside, it's of course impossible to know for sure exactly who voted for whom.
An Ipsos poll published on April 17th showed that 37 percent of labourers voted Le Pen, 32 percent of low-wage earners, and around a quarter of unemployed people. She also topped the votes for under 24s.
For Macron, a third of high-wage earners put his name in the ballot box, and 30 percent of highly educated voters. He topped the list for those earning €3,000 a month or more in salary.
Opinion polls in the lead up to the election gave a good insight into the two sets of voters.
READ ALSO: Who are the eight million French voters ready to back Emmanuel Macron? Macron's supporters typically span across all ages.
“It's true that he's not as strong as Marine Le Pen among young voters but he is much stronger than her among older generations,” Edouard Lecerf from the polling institute Kantar Public told The Local in the lead up to the election.
Macron's supporters are typically well educated upper middle earners, or “the French that are doing well”, according to Bruno Cautres from the Cevipof institute.
“They have a good education, good jobs and good opportunities and have optimistic views about the future,” he told The Local.
“They are from the France that has not suffered because of inequalities.”
READ ALSO: Who are the eight million French voters expected to back Marine Le Pen? Le Pen's supporters, on the other hand, are typically working class people, who have been shifting from the left to the far right since the late 1980s.
As in the case of Donald Trump and the UK's Brexit voters the working classes feel they have lost the most through globalization, rapid de-industrialization and immigration.
What do the voters want?
One thing is clear about the two sets of voters – they're not just divided geographically and socially. There is also a big difference in the issues that matter to them.
When The Local spoke to dozens of Macron's faithful supporters at one of his pre-election rallies, the response was clear.
They're looking for France to be part of a strong Europe, forward thinking, a smart economy and open to the world.
“I want a better political future for my children,” one supporter told The Local.
READ ALSO: This is why millions of French voters are backing Macron Le Pen supporters at her Paris rally spoke of the importance of putting France first, stopping radical Islamism, and clamping down on immigration. “We want our country back,” came the plea over and over again.
“Voting for Le Pen is about getting the forgotten France back again,” said Quentin a 29-year-old political adviser for the National Front.
READ ALSO: This is why millions of French people will vote Marine Le Pen It remains unknown as yet how a divided France will choose to vote on the big day, but polls have suggested they will lean heavily towards Macron for an easy win.