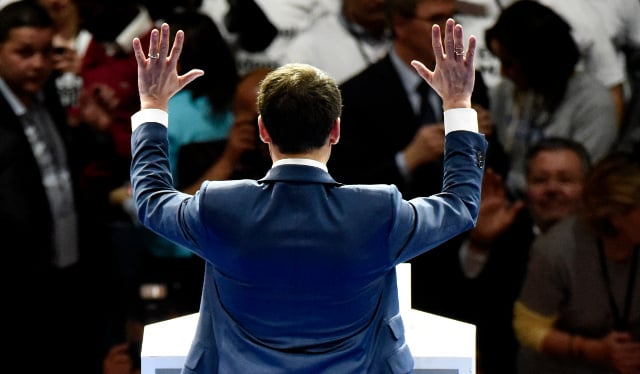 Emmanuel Macron, the man referred to as an upstart, dreamer, maverick, chancer, and big time gambler looks like pulling off one of the biggest coups in French political history.

On Sunday millions of voters ensured he would go into the second round runoff vote against Marine Le Pen on May 7th.

Polls up until now suggest he will win that duel handsomely as voters on the left and the right vote to block Marine Le Pen from gaining power.

But when the former economy minister quit the government and announced he was running for the presidency last November most political experts in France thought he had lost the plot.

“On paper, his ambition is pure madness. His chances of winning are minuscule,” wrote one. Ifop pollster Jerome Fourquet told The Local Macron simply “does not have enough support to become king”.

READ ALSO: This is why millions of French voters are backing Emmanuel Macron for president

But now Macron is well on the way to becoming France’s “king”.

How times have changed.

Only last September a poll said a majority of French people did not even want the former Rothschild banker to run for the presidency. But that was before the stars aligned for Macron with heavyweights Alain Juppé, Manuel Valls and François Hollande either losing their party primaries or deciding not to run.

That was also before Fillon was left hamstrung by the fake jobs scandal and the disastrous way he chose to handle it – by blaming everyone but himself and refusing to answer questions about his wife's “jobs”.

Marine Le Pen's campaign also stumbled as she too was hit by scandal.

Things continued to go Macron’s way in the run-up to the election.

He survived the live debates fairly unscathed, helping to convince voters he had the stature to survive at the top end of politics.

Macron pulled in heavyweight support in the form of minister Jean-Yves Le Drian and former conservative Prime Minister Dominique Villepin. He was successfully convincing people he was “neither of the left nor the right”.

There were worries though that Macron could still fall at the final hurdle. A slip, a blunder, a scandal even, could still scupper him.

He was repeatedly questioned about his finances and earnings as a banker. But he decided to reveal all and tell journalists exactly where his earnings went, including on renovating his wife's house.

The more he looked certain to come out on top the more his rivals began to focus on him, but he successfully deflected the blows.

READ ALSO: A look at what a 'President Emmanuel Macron' has in store for France

Marine Le Pen and François Fillon came in for the more stinging criticism, especially in the second debate, from anti-capitalist Philippe Poutou.

Macron appears close to pulling off his “mad” gamble to prove that the traditional left and right of French politics are defunct – neither party made it into the second round for the first time in modern French history.

He will not take anything for granted over the next two weeks, with Marine Le Pen likely to launch missile after missile against his pro-Europe, pro-free market policies.

Yet he knew all along he just had to get into the second round and the country's longstanding anti-Le Pen forces will come to his aid.

Within minutes of the result being announced politicians lined up to back him, including François Fillon and Alain Juppé.

Macron surely just has to hold his nerve now.

ALL THE LATEST: French Presidential Election 2017