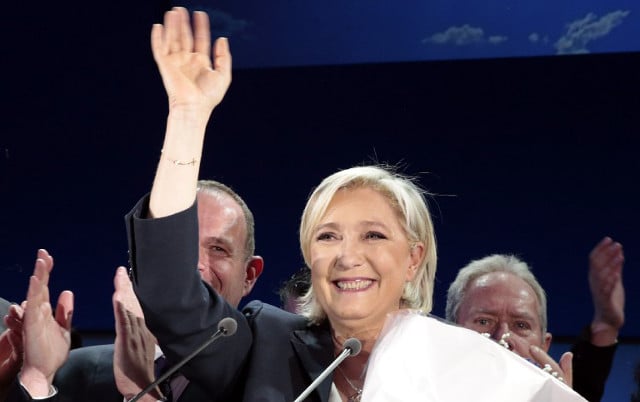 Photo: AFP
One of the quickest calls came from defeated candidate François Fillon, insisting on the need to block the National Front from power. He said: “I'm not doing this with a lightness of heart”.
Fillon talked of the danger to France that Marine Le Pen's “extremism” posed.
“There's no choice but to vote against the the extreme right. I will vote in favour of Emmanuel Macron,” he told his downbeat supporters.
Fellow Republican party politician and former Prime Minister Alain Juppé followed suit, announcing he decided to vote for Macron “without hesitation”, to support his “duel against the extreme right, who would be a disaster for France”.
And on the left defeated Socialist party candidate Benoit Hamon also called for supporters to back Macron, “even though he's not part of the left.”
Socialist Prime Minister Bernard Cazeneuve joined in, saying “the result calls for a clear and strong position from all republicans,” and asked them to vote “to beat the National Front and defeat their fatal project.”
Former Justice Minister Christiane Taubira followed a similar sentiment, tweeting “without doubt, without delay, obviously we will vote for Macron.”
Many other politicians on all sides issued the same call.
These calls come as no surprise to those who witnessed the 2002 elections, when Marine Le Pen's father and former National Front leader Jean-Marie also made it to the second round, only to be met with the same calls to block his ascent to the Palais Elysée.
He was trounced by Jacques Chirac in the second round.
What's known as the “republican front” has become somewhat of a tradition in French politics, usually referring to keeping Le Pen's party away from power. It worked in the 2015 regional elections when despite strong first round scores Le Pen and her party failed to win control of any regions.
The news that history was repeating itself didn't impress Le Pen supporters in Henin-Beaumont where the candidate held her electoral evening on Sunday.
“I was expecting Fillon would call for a blockage against Le Pen, we need to hope the French will stay with their convictions and not let themselves be manipulated like that,” a woman named Christelle, 45 told The Local.
And some Le Pen supporters there believed his calls will land on deaf ears.
“Fillon is only talking to himself and no one has been listening to him for a while,” Gautier, a 42-year-old nurse, told The Local.
“People are free to vote with their own conscience. Even tonight at his rally his own fans weren't of the same opinion and started leaving before he even finished talking. I think a lot of Fillon's supporters will come to Le pen now, which is a good thing.”
Opinion polls in the run up to the election suggested as many as a third of Fillon voters would be ready to back Le Pen if the case he was defeated in the first round.
Despite the republican tradition, smaller far-left parties are striking a different tone and defying the block, maintaining their position as against both pro-business and EU Macron and nationalistic Marine Le Pen.
Philippe Poutou of the New Anti-Capitalist Party decided not to call on people to vote against Le Pen, saying Emmanuel Macron “is not a rampart against the National Front”.
Communist party candidate Nathalie Arthaud said that she would instead give a blank vote, “rejecting the National Front while not believing that Macron is a block to her.”
Leftist Mélenchon announced that he won't tell his supporters how to vote. However, even if he did call upon his “France Insoumise (defiant)” movement to vote for Macron, many would find it hard.
“Macron is more fascist than Le Pen,” one supporter at Mélenchon's electoral evening, 66 year old Francoise, told The Local.
Hamon's voters were more ready to back Macron but many will be left with a bad taste in their mouths.
Out of the many The Local spoketo on Sunday night, only one said he wouldn't vote for Macron.
But it would be with heavy hearts that those on the left will vote for the En Marche candidate, who is just seen as too pro-free market for many of them.
“Hugo Bacoul, a Hamon supporter told The Local: “It's really complicated now because I think that 30 percent of French people relate to neither the values of Macron nor Le Pen.
“But we can't get Le Pen into power. Macron is not much better, but he is just not as bad.”
Another Hamon supporter named Yves Lechermeier told The Local: “Macron is the worst candidate to run against  Le Pen. I will definitely vote for him but with disgust.”
So Macron may benefit from the “Front Republicain” against Marine Le Pen to achieve the 50 percent he needs,  but that doesn't mean a majority of the French people will be over the moon to see him as their president.
By Rose Trigg