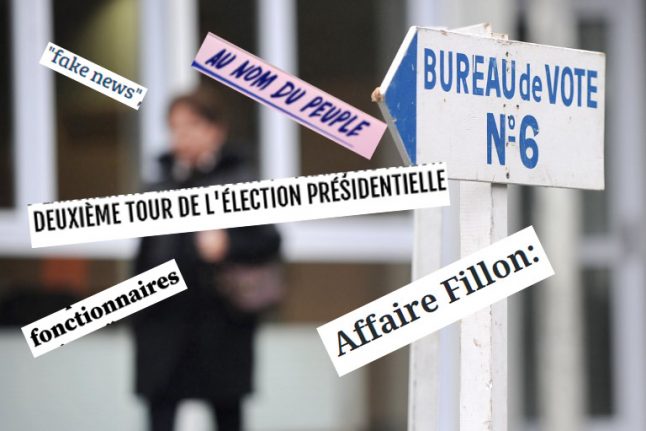 All photos: AFP
Here's a guide to the terms that you will come across in election time.
Président de la République française – France's President
This is who it's all about. France's will soon get its 25th president since Napoleon III, who was inaugurated in 1848 and considered to be the first president of France.
The race to the finish line:
As the election race  (la course a l'Elysée) heats up and the polls show four candidates now in with a fighting chance of making the second round, the language used to describe the current tightness of the contest has changed.
For a start the term “dans un mouchoir de poche” is used frequently. It literally means “in a pocket handkerchief” but it would be more translated as “neck and neck”, “too close to call”, or “down to the wire”.
Another term being used is “coude-à-coude“, which literally means “elbow to elbow” as you can imagine Marine Le Pen and Emmanuel Macron elbowing each other in the race for the finish line.
“vote utile” is also a phrase everyone is mentioning. This basically means “useful vote” and describes voting for a candidate with a chance of making the second round rather than the one you really want.
Voting day:
It's time to vote for the first round! The French will head down to their polling station (local bureau de vote), probably carrying their voting card (carte électorale), enter the polling booth (isoloir), fill in a ballot paper (bulletin de vote) and drop it in a ballot box (urne de vote).
Unless that is they vote by procuration, which means “by proxy”. In other words giving someone the permission to vote for you.
These votes will then be counted in a process called “dépouillement” (extra points if you can pronounce that correctly.)
Ouverture / Fermeture des bureaux de vote – Opening and closure of polling stations
Polling stations will open at 8am this year and close at 7pm apart from the big cities like Paris and Lyon when they will close at 8pm.
Estimations/ résultats partiels – estimated/ partial results
The first round result is announced live on TV at 8pm but it is actually based on a partial count of votes from certain polling stations, chosen to be demographically representative across the country.
Even though it's possible that the final result could differ from the partial ones, you can take it as a pretty sure bet as they have never been wrong before, although this year they have an hour less to do the calculations. Faire barrage à — To block (a candidate)
France is no stranger to tactical voting, and this election will be no exception. You will probably see headlines at the time of the second round about people calling to block Marine Le Pen's chances of winning by voting for anyone else.
This is often referred to as to “faire barrage au Front National…“
The other term you might see or hear that refers to keeping the Front National out of power is le Front Republicain or Republican Front, which is the united front to keep out the far right. Le taux de participation – Voter turnout
How many people voted? The taux de participation will reveal how many voters turned up to have their voice heard.
Le scrutin – vote/election
This is often used as a synonym for voting or election, you might see it used in the phrases règles du scrutin (voting rules) or jour du scrutin (election day).
Electeurs / votants – Electors/voters
The most important people in any election of course. To be eligible to vote you'll need to be a French citizen over the age of 18.
Soirée électorale – election night event
Each of the candidates will be present at their own election night event on Sunday, and besides Marine Le Pen, they'll all be in Paris.
Here's where you can find them
LINGO FOR THE CANDIDATES
Candidat – Candidate
Ok, this was an easy one to translate, but we may as well start off simply.
Les Petits Candidats
“The little candidates” is the term being used not to describe the elections runners who are on the short side, but those outsides who don't really stand a chance of winning. There are six of them and you can find about more about the “little” ones here.
La Gauche – The left
Those on the left (the political left, that is) include Socialist candidate Benoit Hamon and hard-left (extreme gauche) candidate Jean-Luc Mélenchon who leads the France Insoumise movement (Unsubmissive France),
La Droite – The right
On the right we have Francois Fillon of the Les Républicains party and Marine Le Pen of the far right (extrême droite) National Front.
Au nom du peuple – In the name of the people
This is Marine Le Pen's campaign slogan
Ni droite, ni gauche – Neither right or left
Emmanuel Macron bills himself as being on neither side of the political spectrum with his centriste En Marche! (On the move!) movement.
“Fake news” – Fake news
A new term for the 2017 election that is rarely translated from English although “Fausses nouvelles” has been used.
Un revenu universel (d'existence) – Universal basic income
Here's a term you might have heard in recent weeks. It's tied to Benoit Hamon, who is pushing to pay everyone in France a living wage in what he says will make a fairer economy. Read more about it here.
Fonctionnaires – Public sector workers
All of a sudden fonctionnaires are the focal point of the election whether it's because Fillon wants to scrap 500,000 of them or Marine Le Pen is issuing veiled threats to them over their investigations into her party's own fake jobs scandal.
Sondages d'opinions — Opinion polls
So who's going to win? Keep your eyes on the “sondages” to see who is leading the race (but don't put too much stock in it, we all know what happened with Trump (and Brexit).
The poll below shows Marine Le Pen is among the poll leaders for the first round, followed by Macron, then Fillon. Financement des campagne – Campaign financing
This is a term that is widely these days due to ex-president Nicolas Sarkozy getting into legal trouble about over spending in his 2012 campaign because he went over the “plafond des depenses” (spending limits).
Débat – Debate
Well, this one was pretty self explanatory but good to know, nonetheless. The presidential debates are set to heat up in the coming months, all in the lead up to the voting.
Premier tour – First round
This refers to the first round of voting and is sometimes written “1er tour”.
It will be held on the 23rd of April. It's extremely unlikely that anyone will win an outright majority (and hence will become president after one round). Which means there will be a deuxieme tour (second round).
Un mandat de cinq ans – A five-year mandate

The president will be around for five years, so vote wisely.
Les elections legislatives – parliamentary elections
But it's not all over over on May 7th of course, because there is arguably a far more important vote in June – the parliamentary elections, where the president will hope to gain a majority in the Assemblée Nationale.
But as well as understanding the language it's also important useful to compare the presidential candidates to cheeses to get a more in depth knowledge of them.
Luckily we've done it for you.
READ ALSO: France's presidential candidates explained… through French cheese POLITICS
From De Gaulle to Macron: A history of French presidential swearing
Url copied to clipboard!