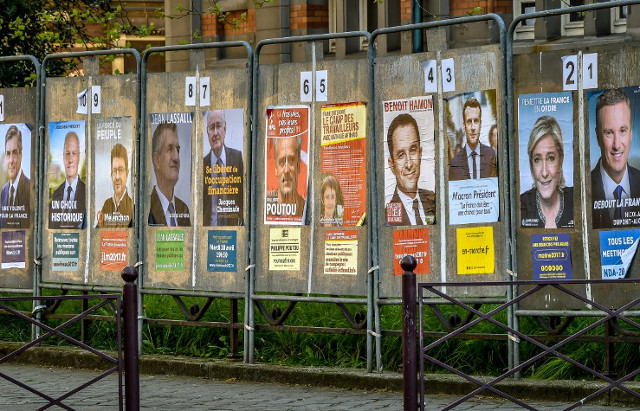 One of the main reasons no one seems willing to predict the winner of the most unpredictable French election is that a quarter of French voters, up to an estimated eight million are believed to have not yet made their minds up even at this late, late stage.

But the polling day is upon us and all those who intend to vote, but just don’t quite know who, will now have to make up their minds.

They are potentially the kingmakers in the first round of France's hard-fought presidential election. While that percentage of undecideds is in line with previous elections, the unprecedented four-way race has made even relatively small rushes of support crucial to victory.

But why, with such an array of candidates – 11 in total – ranging from Trotskyists on the left to nationalists and sovereigntists on the right, are so many French voters still so unsure of who to cast their ballot for?

Many undecided voters we spoke to just didn’t fancy any of the candidates and found it far easier to pick faults in them all rather than look at the positives.

“At the moment, no candidate has convinced me, Khadija Hamoneau, a 27-year-old, bank employee, told The Local.

“It is the most complicated election I've ever experienced. I can't vote for Fillon: he's a crook. I can't vote for Le Pen: she's a xenophobe, she's worse than her father because she actually has a chance to win,” she said.

“Macron has Presidential charisma but encompasses the right and the left, and seems to despise the working class.

“Hamon's program is blurry, people from his own party desert him.

“As for Mélenchon, it's out of question, he's a non-racist version of Le Pen.”

“I can’t vote for Hamon, his proposal for Universal Basic Income is unworkable,” she said. “I wouldn’t vote for Macron. He is too changeable and all things to all people.

“Scandals aside I’d have trouble voting for Fillon because his party is the party of money. Melenchon is a communist and anti-ambition and Le Pen is all pub politics, you can’t take her seriously.”

French political expert Thomas Guénolé says that the hordes of undecideds were actually very analytical voters, not always backing the same party but rather listening carefully to debates, interviews and reading programs. Guénolé pointed out that they were very likely to take their decision during the last few hours.

Cevipof researcher Bruno Cautres told The Local:“One of the main reasons people are undecided is that this Presidential election is one of renewal. Six months ago, everybody was saying that it would have been like it was 5 years ago, and it isn't.

“The two big political entities were disrupted by new concerns, such as globalization and Europe, that introduced new cleavages,” he said.

One big factor in all those wavering this year is the “useful vote” or “vote utile”. This refers to those who rather than vote fortheir chosen candidate prefer to vote usefully and ensure another candiate, perhaps a second choice who stands a better chance of winning, makes it  through to the second round.

In 2012, this wasn't an issue with polls showing Nicolas Sarkozy and François Hollande well ahead of all the other candidates.

But on Sunday as many as four candidates – Macron, Le Pen, Fillon and Melenchon, stand a chance to make it to the second round, but they could also miss out.

Do Hamon's voters go with conviction for their man, or vote “usefully” for Macron, to try to ensure the second round is not a Fillon – Le Pen face off, a nightmare scenario for the left?

We're socialists but we're undecided, Hamon is low in the polls. My heart supports Hamon, but my head backs Macron”, Hannah, 60, a trader, told The Local.

Political scientist Richard Kleinschmager told AFP one of the reasons why voters may be undecided is that two of the main candidates have been rocked by scandals, which may have slightly but not totally put them off.

“There is a danger in having so many undecided voters at this late stage, said Kleinschmager.

“The danger is when we don't know what to hold on to,” he said. “So we grab a lottery ticket while telling ourselves 'why not'. That lottery ticket is Marine Le Pen”.