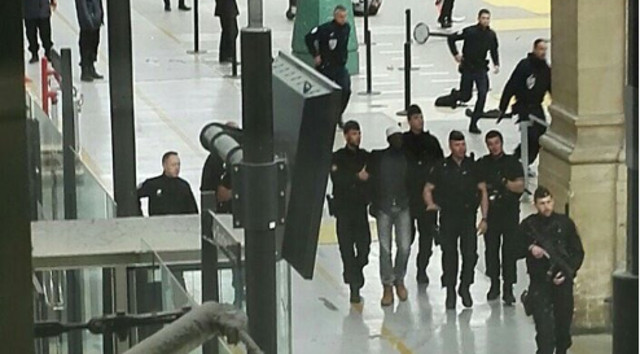 According to reports the man was reportedly “walking with a knife” but it is not clear whether he was brandishing it in the open.

Images posted on Twitter showed armed police pointing guns at the man as they searched him on the ground .Other officers could be seen telling members of the public to move away from the area.

The incident was dealt with quickly by French police who were later seen leading the suspect away in handcuffs.

“An individual carrying a knife came into the station, was pointed out to a police patrol which immediately arrested him,” one of the sources said.

No-one was injured in the incident.

One police source told BFM TV the suspect said he carried a knife “because he feared for his life”. The source added that he was never “menacing” and followed police instructions to lie down immediately.”

They were eager to calm fears and dismiss rumpurs it was an attempted attack with the source telling BFM TV, it was a “non-story”.

But nevertheless, such is the anxiety in France right now after Thursday's Champs-Elysées attack, the incident did cause panic.

Witnesses spoke of passengers fleeing in panic leaving their suitcases behind and false reports quickly spread online that there had been an “explosion” and a terror attack.

The incident comes just two days after a gunman killed a police officer on the Champs-Elysées and wounded tow others.

France is on edge for further attacks with voters set to go to the polls on Sunday to choose their new president.

Some 50,000 police and 7,000 soldiers are to be mobilized across the country and polling stations in Paris are to be given particular protection.