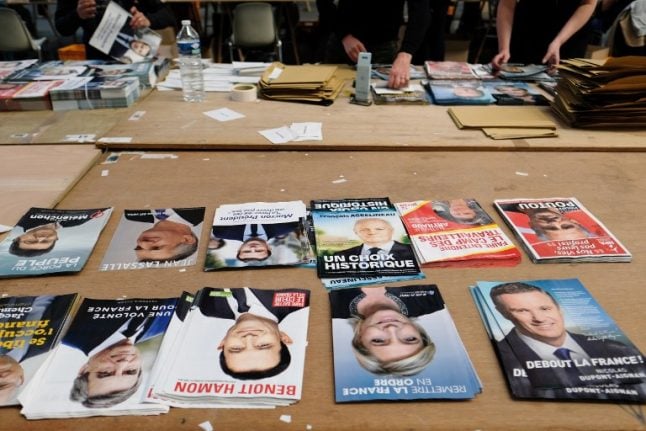 Photo: AFP
Millions of French people will be casting votes in the upcoming two Sundays and France will be left with one president.

Here's a breakdown of the French electorate – from the number of voters to where they are and how they're expected to cast their ballots. We also take a look at the latest polls, the number of abstainers, and the number of undecided voters who may just swing the election.
47 million voters
According to the Interior Ministry, close to 47 million people are eligible to vote in the elections. They're made up of 45.7 million in mainland France and 1.3 million living abroad. How are they divided?
Seeming they haven't actually voted yet, we can only go by opinion polls and past voting habits.
Out of the four front-runners – Emmanuel Macron, Marine Le Pen, Francois Fillon, and Jean-Luc Mélenchon, both Le Pen and Mélenchon have run for president before.
Here's a map showing where people picked Le Pen in the first round of voting in 2012, with her strongholds in north eastern France and the south east resonating clearly above the rest of the country.
READ MORE: Who are Marine Le Pen's voters? And here's a map showing who voted for Mélenchon in the same first round. Neither Le Pen or Mélenchon saw the same success rate that they are tipped to have this time around (more on this soon). According to an opinion poll from about a month ago, Le Pen will pull in much higher figures this time around.
Indeed, the sea of blue below shows areas where Le Pen is top pick for the 2017 first round. Yellow is Macron. Grey denotes a tie between Le Pen and Macron. No other candidate tops the lists for the regions of France. The highest scores of all were for Marine Le Pen in PACA, in the south east of France, where 35.5 percent of respondents voiced their support (compared to 20 percent for second-placed Macron).
Le Pen also scored over 30 percent in Bourgogne-Franche Comté (31 percent), Grand Est (33 percent), and Hauts de France (35 percent).
Macron polled the highest in the Brittany region in western France, with 30.5 percent, and he is followed by Fillon and Le Pen at 18 percent each.
Macron's highest score besides Brittany is in Pays de la Loire at 30 percent, followed by Centre-Val de Loire at 27.5 percent, and Ile-de-France at 27 percent. The undecided voters
The 2017 election is one of the most uncertain in recent history. Indeed, recent polls suggest up to 40 percent of voters still don't know what name they'll choose when they get to the polling stations on Sunday.
So why are they so undecided?
French far-right leader Marine Le Pen is too extreme, centrist Emmanuel Macron is too young, Conservative Francois Fillon cannot be trusted, Socialist Benoit Hamon is the establishment, and Communist-backed radical Jean-Luc Melenchon is too risky.
At least that's what French people are saying. Read this article for a much closer look at France's undecided voters.
Abstention rates
Nationwide, 71 percent of eligible voters are expected to vote in the first round, meaning a predicted abstention rate of 29 percent.
This is unusually high for France, which saw a 20 percent abstention rate in the 2012 presidential election, and as low as 16 percent in 2007.
A high abstention rate means the new president, who as always will need to win over 50 percent of votes in the second round run-off, will almost certainly need to win over fewer voters in total when compared to previous years. Read more about this here.
READ ALSO: How stay-away voters could sway the French election Who is actually abstaining?
For a start, it's not just the public threatening to not cast a vote.
“If I wasn't a candidate, I think I would abstain,” Anti-capitalist candidate Philippe Poutou said recently.
As for the 47 million people eligible to vote, we can only predict where the abstainers will be based on previous elections. Here's a breakdown from the 2012 presidential election, back when France was split into more regions.
Notable points: Corsica had a whopping 26 percent abstention rate, while Brittany, Limousin, and Pays de la Loire all came in below 16 percent.
Alsace – 20.4 percent
Aquitaine – 16.9 percent
Auvergne – 16.4 percent
Lower Normandy – 16.8 percent
Burgundy – 18.5 percent
Brittany – 15.3 percent
Centre-Val de Loire – 18.1 percent
Champagne-Ardenne – 20.2 percent
Corsica – 25.7 percent
Franche-Comté – 17.2 percent
Haute-Normandie – 18.9 percent
Ile-de-France – 21.8 percent
Languedoc-Roussillon – 17.4 percent
Limousin – 15.6 percent
Lorraine – 20.4 percent
Midi-Pyrénées – 15.6 percent
Nord-Pas-de-Calais – 21.4 percent
Pays de la Loire – 15.8 percent
Picardie – 18.9 percent
Poitou-Charentes – 17.5 percent
Provence-Alpes-Côte d'Azur – 19.4 percent
Rhône-Alpes – 17.6 percent Age of voters
Here's a closer look at the ages of the the supporters for the three main candidates.

Macron supporters: Given Macron's own age (at 39 he is the youngest candidate by ten years) he's not quite the candidate for young people that you might imagine.  According to a February Ifop study, his voters are fairly evenly spread across the ages.
Some 22 percent of those who intend to vote for him are under the age of 35, but another 22 percent are in the 65 and over age category. Both the age categories in between come in at 19 percent.

READ MORE: Who are Macron's supporters? Fillon will pick up 51 percent of the votes from people aged 65 plus, at least according to a recent survey from the pollsters at Opinion Way.
Other recent surveys have found a similar trend, and it's way above the 18 percent of the general public's vote that he is expected to get.
Of the people who say they will definitely vote for Fillon, 47 percent are over 65, according to a Cevipof poll.
READ MORE: Who are Fillon's supporters?
Le Pen: Daily polls by Ifop suggest as many as a third of young voters will vote for Marine Le Pen.
In the 2015 regional elections more young voters turned out for the National Front than any other party, although many young people simply abstained.
One poll showed a majority of those young National Front voters were motivated by a need for change.

Age breakdown of Macron vs Fillon vs Le Pen in Rd 1
Look at the 18-24s & 35-49 for Le Pen
Doesn't fit easily with tolerant youth thesis pic.twitter.com/HTH8UGNRBb

The latest opinion polls
Though we all know that we can't trust the opinion polls, here's an Ifop poll from Tuesday this week.
Emmanuel Macron was leading the charge at 23.5 percent, with Marine Le Pen one percentage point behind at 22.5 percent.
In third was Francois Fillon at 19.5 percent, followed by Jean-Luc Mélenchon at 19 percent. In fifth was Benoit Hamon at 7.5 percent. Voter certainty
The certainty with which the polled public will actually vote for their top pick does not mirror the polls mentioned above.
In fact, Macron drops from top spot to fourth in this measure. The strongest support comes from Le Pen voters, 83 percent of whom are sure they'll tick her name. Next is Fillon at 81 percent certainty, then Mélenchon at 69, Macron at 68, and Hamon at 59.
The “other six”
Here's a look at the other six candidates who are running for president. As you can see, they're polling a lot lower, which is why you probably haven't seen their names in so many headlines.
With the exception of Nicolas Dupont-Aignan, who is polling at 4 percent with 50 percent certainty, the rest are only pulling in between 0 and 1.5 percent of support.
The outlier is Jacques Cheminade, who has 0 percent support, and thereby 0 percent certainty rate. Second round polls
When the rest of the pack has cleared out and it's just the last two – in this case Macron and Le Pen, Ifop says the final score would be 60.5 percent to Macron and 39.5 percent to Le Pen.
Of course, the accuracy of these polls is hard to predict, but one thing is for certain – we are in for a few surprises. Here's a guide to what we can expect in the coming days.
READ MORE: How France's poorest and richest towns see the election very differently