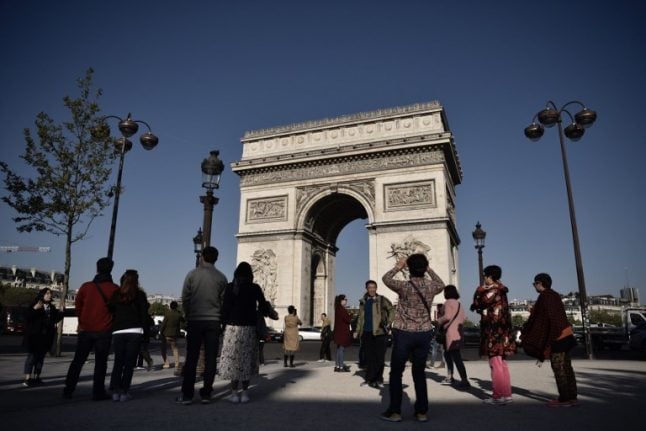 Tourists at the Arc de Triomphe on Friday morning. Photo: AFP
The images broadcast around the world on Thursday night will do nothing to help the City of Light, as far as tourism is concerned.
News stations showed heavily armed police, tourists running for cover or hiding under tables and the bright flashing lights of police cars blocking off the world's most famous avenue, the Champs-Elysées, with the iconic Arc de Triomphe lit up in the background.
After all the work and investment done to lure tourists back after the Paris November 15 attacks potential visitors from around the world will no doubt – once again – be asking themselves if it's safe or even wise to visit at all.
“I just want to go home,” said Isabel, a 34-year-old Australian tourist, who was blocked from returning to her lodging by police tape following the Champs-Elysées attack. A woman leaves flowers on the Champs-Elysées on Friday morning. Photo: AFP
Here at The Local we often receive messages from concerned readers asking us if it's safe to visit Paris. After the deadly attacks in November 2015 coming months after the Charlie Hebdo killings and other attempted or thwarted attacks, it's no surprise visitors watching on screens from far away are scared.
We simply say that we feel safe living here and the chances of being caught up in a terror attack are slim. Although Thursday night's attack took place on the city's most famous thoroughfare, it was the Paris police force that was targeted, not the tourists.
Poonam Wadher, a British citizen who lives in Paris, heard the frightening shooting and was forced to take cover in the toilets of a nearby restaurant with her three-year-old son
“The attack hasn't put me off living here. I work here, my son goes to creche here. Paris is our home,” she told The Local.
Paris suffered a drop of 1.5 million tourists in 2016 as fears linked to terror attacks scared off visitors. A bullet hole in a window on the Champs-Elysées. Photo: AFP
While tourist numbers picked up towards the end of the year France's government is well aware that tourists are being scared away, and met in November to discuss tourism for the first time in 13 years.
The government was prepared to spend €42 million on measures to woo visitors back, and the top of their agenda was security – with around €15 million to be dedicated to making visitors feel safer.
Paris mayor Anne Hidalgo also revealed in February how she plans to make sure Paris retains its title of the most visited city in the world.
Of course, tourists will still come to Paris. Indeed, France welcomed more tourists than any other country in the world last year (up to 83 million) – and many of them were defiant that terror wouldn't impact their own holiday plans.
And in a promising sign, many of the tourists in Paris on Friday morning weren't afraid to head to the Champs-Elysées the morning after the attack.
“I needed to get out, to come back here and see the sunshine and that everything was OK,” said Lebanese tourist Zeina Bitar, 45, who was shopping on the boulevard with her children when the gunman struck.
“We heard the shots and people were running in every direction,” said Bitar, adding that her children were in tears. “But people were calm, we were well treated and they gave us hot chocolate.” Eric Winkler, 51, an American visiting the French capital from Boston, told AFP: “It was scary. We heard the shots so we ran to our hotel… and found out it was terrorism by watching the news.”
But he and his 16-year-old daughter Hailey took it in their stride.
“It's happening all over the world, also in America,” Winkler said. “We have to deal with it, they're not going to stop us from living and doing what we want to do.”
Visiting from Los Angeles, 60-year-old Felix Cervantes said he could have been at the Champs Elysees on Thursday evening but had gone to the Louvre museum instead.
“I'm not afraid at all,” he said. “We're going to stay in Paris till next week whatever happens.”
Scottish tourist Lesly Douglas, 55, had mixed feelings: “We're convinced that Paris is the safest place in the world, but of course we were scared seeing the policemen with their guns.”
But her 62-year-old husband Michael was adamant that the couple would visit the French capital “for years to come”, adding: “Vive Paris!”