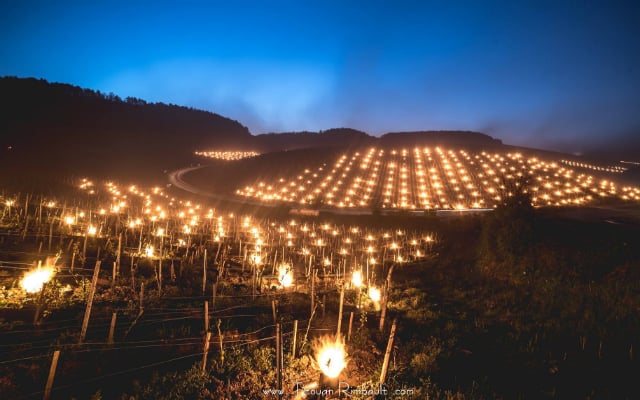 Photo: Titouan Rimbault
Winegrowers in the Burgundy in central France have had a frantic few days trying to rescue their crops from frost, which is unusual for this time of year.

To save the vines from the unusually low temperatures, winegrowers brought in hundreds of oil-burning heaters that they spread across the vineyards.

“It's really tricky because the frost hit when the grapes were just forming,” FNSEA spokesman Jerome Despey told AFP, saying the fruit could wither on the vine. The cold snap with temperatures as low as minus six degrees Celsius (21.2 degrees Fahrenheit) has also affected vineyards in the Loire Valley and Languedoc-Roussillon in the deep south, Despey said. Burgundy, home to popular Chablis wines, saw a similar freeze last year.
Many winegrowers are trying to limit the damage using heaters or the more traditional method of setting out oil drums with fires burning in them among the vines. “That's two nights in a row I've been up at midnight checking temperatures, plot by plot,” said Stephane Aufrere, a vintner in the Chablis region some two hours southeast of Paris by car.
“We light the fires as soon as the mercury drops to zero on a wet day and minus 2.5 when it's dry.”
But he is deploying the fires only on a small section of his 20-hectare (50-acre) vineyard because of cost concerns.
The cold snap will also hurt the harvest in the eastern Jura region, famed for its sherry-like vin jaune (yellow wine), Jean-Charles Tissot, chairman of the local wine marketing council, told AFP. “The damage could reach 40 to 50 percent” of the harvest, he said.
Some winegrowers use wind machines to keep frost from setting in.
Others use water sprinklers, allowing a fine coating of ice to form on vines and keep them from freezing through, acting as mini-igloos.