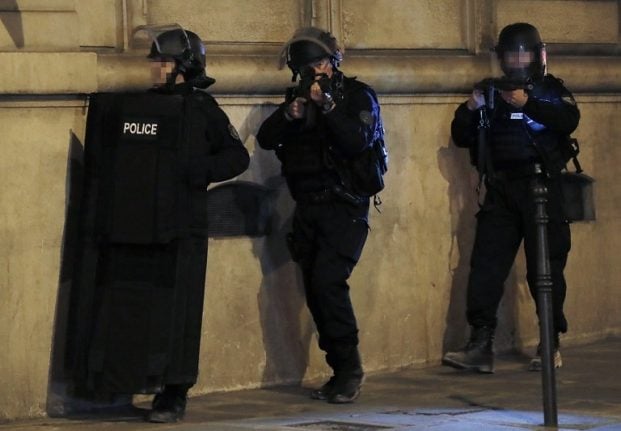 A gunman opened fire on police officers on the famous avenue in the west of Paris around 9pm on Thursday evening when the boulevard was packed with shoppers, restaurant goers and tourists.

One officer was killed and two others injured, at least one them critically.

The shooter was also killed at the scene, police confirmed, with sources telling French media he was already known to intelligence services for having already expressed a desire to kill police officers.

He has been named as 39-year-old 'Karim C', who was born in France, according to report in France. His home was raided shortly after the attack.

Paris police understandably on edge two hours after attack on officier in the 8th arrondissement, on the tourist hotspot Champs-Elysées. pic.twitter.com/78rKt3Vg8r

A spokesman for the ministry of interior said the shooter pulled up in a car next to a police car and opened fire, before trying to flee on foot.

He injured two more officers before he was killed when a group of police officers on patrol fired back, said Pierre-Henry Brandet.

“This is a tragedy for the police and a tragedy for France,” he said adding that Parisians are advised to stay away from the area. He urged caution over the identity of the gunman.

Not long after President François Hollande said that the shooting was a suspected terrorist attack, Isis claimed responsibility.

One witness told BFM TV he saw the man pull out a kalashnikov before opening fire.

“As soon as we realized he was shooting we ran into a shop and ran upstairs and saw out of the window the police shoot him dead,” said the unnamed witness.

France's counter-terrorist investigators have been placed in charge of the investigation, suggesting authorities are in little doubt the shooting is just the latest in a series of terror attacks against France and in particular its capital city in recent years.

This latest attack comes just days before France goes to the polls for the first round of the presidential election.

The Local's Oliver Gee said: “There are extremely tense scenes around the Champs Elysees as police cordon off all the roads nearby.

“There are helicopters overhead and police are treating anyone driving or walking in the area with extreme caution.

“They are searching everyone and pulling out their weapons at the sign of anything suspicious. They are on edge and the public are confused and worried.” The shooter opened fire with a kalashnikov near the Marks & Spencer store on the famous shopping shopping boulevard that is popular with tourists.

“We were in a restaurant just off the Champs Elysées and we were told by the owner we couldn't go out. There was a terror attack, they said. There were police everywhere,” a Vietnamese man named Tran told The Local.
“We were locked inside because police confirmed the attack. We were not scared because we were upstairs and not in the street. After an hour an a half we came down in a group with police and were taken to safety.
TV images on BFM TV showed the flashing lights of police vans along the avenue up to the famous Arc de Triomphe, while police were seen telling members of the public to move away from the area.

Witnesses told BFM TV the avenue as well as surrounding streets have been cordoned off. A police helicopter hovered overhead.

“At first we thought it was firecrackers but then we realized it was a shooting and everyone ran in panic. People were crying,” one shopkeeper told BFM TV.

“The area was cleared really quickly.” France has been on high alert for terrorism after attacks in Nice and Paris in recent years claimed over 230 victims.

On Tuesday two men were arrested in Marseille on suspicion of planning various attacks around the presidential election.

French police officers have been the subject of numerous jihadist attacks, including one to north of Paris in summer last year when two officers were killed at their home in front of their son.  French soldiers have also been targeted.

Thousands of troops and armed police have been deployed to guard tourist hotspots such as the Champs Elysees or other potential targets like government buildings and religious sites.

Up until now, polls showed voters more concerned about unemployment and their spending power than terrorism or security, though analysts warned this would change in the event of further bloodshed.