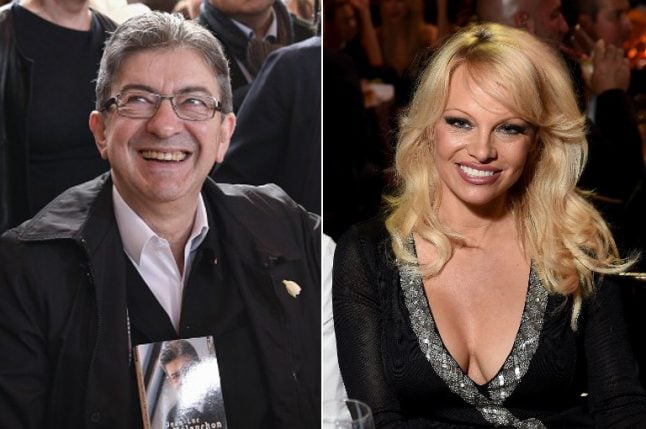 Mélenchon (left) and Anderson (right). Photo: AFP
In a blog post she touched on espionage on French political parties, adding: “I feel the French especially understand how important it is to seek the truth”.
She was especially impressed, it seems, by Mélenchon's promises to grant WikiLeaks founder Julian Assange asylum and citizenship.
“There has even been mention of the Legion of Honor by Mélenchon, a fellow animal crusader, climate change champion and believer in justice for all,” she wrote.
“How wonderful it would be to reunite Julian and his young family in France. Mr Mélenchon for President! S'il vous plait”
The former Baywatch star isn't the only high profile US star to back Mélenchon.
In fact, celebrities in the US have launched a petition in support of the candidate, signed by Hollywood actors Danny Glover and Mark Ruffalo (pictured below). “Don't force French voters to choose between corporate establishment liberalism and xenophobic right populism,” the petition reads.
“Unite in the first round of the presidential election behind the Left candidate with the most support in the polls,” referring to Mélenchon.
The petition, which has over 7,000 signatures, was also signed by leftist academic Noam Chomsky, Vagina Monologues playwright Eve Ensler, and director Oliver Stone.
Lethal Weapon actor Glover said it was “crucial” to vote for Mélenchon, urging his Twitter followers to join the call for “a progressive presidential candidate”.

@mrdannyglover Merci pour votre soutien ! / Thank you for your support !

Still in the US, late night host John Oliver went viral this week with his humorous take on the French elections, in which he warned voters to steer clear of Marine Le Pen.
The clip has drawn in over 5 million hits since Sunday.