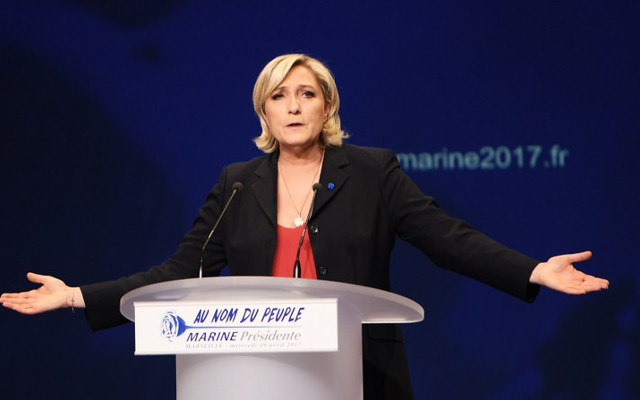 French far-right candidate Marine Le Pen on Wednesday accused her rivals of turning a blind eye to Islamic terrorism at her last major rally before the first round of a nailbiting race for president.

Addressing nearly 5,000 flag-waving supporters in the southern city of Marseille, where two Frenchmen were arrested Tuesday on suspicion of planning an attack on the election, the National Front (FN) leader said: “I have been denouncing this terrible poison of Islamic terrorism since I launched my campaign … and none of my rivals are willing to debate the subject. “They wanted to stay quiet about this problem, to suppress it, to keep it at a distance like one sweeps dust under the carpet,” she said.

“The silence of the other candidates comes from shame, the shame of being a member or even having led a government which did nothing to lower the threat and even created the conditions for this scourge to develop,” she told the rally, which was held under tight security.

Police fired teargas and arrested four people after around 500 people demonstrated against Le Pen (see pic below) and tried to march towards the rally. Some of them threw projectiles and firecrackers. “Terrorist acts have multiplied throughout Europe during the campaign,” she said. “Here in Marseille two fanatics were arrested before they committed odious crimes.”

Le Pen, 48, has spent years trying to grow support for the FN by campaigning on bread-and-butter issues, but in the final days of the race she has returned to its stock themes of immigration and national identity.

In a BFM television interview Wednesday she repeated that she would slash immigration, make it harder to get French nationality and crack down on suspected Islamists.

A new survey published Wednesday showed Macron leading on 23 percent to Le Pen's 22.5 percent — both of them down slightly.

Fillon had improved to 19.5 percent while Melenchon had reached 19 percent, narrowing the gap with the frontrunners.

The top two will advance to a run-off vote on May 7th.

Jean-Yves Camus, an academic and expert on the FN, told AFP that Le Pen had returned to the “fundamentals, and particularly immigration” in the final run-in.

“It's back to basics,” he said. “The FN top brass has decided to go full throttle for far-right voters.” ( sEcurity was tight at Le Pen's rally in Marseille.)

'Terror would not have happened under me'

Le Pen has claimed that her proposals such as expelling any foreigner convicted of a crime or suspected of being radicalised would have helped prevent some of the attacks since 2015 which have claimed more than 200 lives.

Left-leaning Le Monde newspaper has dismissed the claim as “absurd” given that most of the attackers were French, many without criminal records.

“You don't seek votes on the backs of dead people. It's a sort of moral red line,” the newspaper said.

French voters have so far been more concerned about unemployment and their spending power than terrorism or security, polls show, though analysts warn this would change quickly in the event of bloodshed.

Some analysts have also depicted the French election as a sort of referendum on the European Union, with Le Pen proposing to a referendum on France's membership of the 28-country club and scrap the euro common currency.

On Tuesday night, she insisted that the TF1 television channel remove the blue-and-yellow European flag from behind her before an interview.

Polls show that a majority of French people still support the EU and the euro.

The election has been one of the most unpredictable in decades and takes place against the backdrop of Britain's shock decision to leave the EU and Donald Trump's presidential victory in the United States.