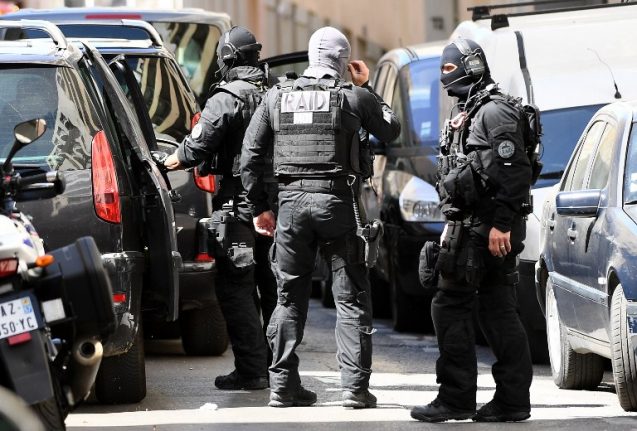 Counter-terrorist police and soldiers in Marseille at the scene of the raid. Photo: AFP
The foiled plot sparked fears the closing days of the campaign could be a target for extremists ahead of Sunday's vote.
Elite police and agents from France's domestic intelligence agency detained the two Frenchmen — identified only as 23-year-old Clement Baur and Merabet Mahiedine, 29 — with Interior Minister Matthias Fekl saying they were known to be “radicalised.”
“They were aiming to commit in the very short term, in other words in the next few days, an attack on French soil,” Fekl said.

Several French media cite sources in the intelligence services who say the attack plot was targeting a specific presidential candidate.

Reports suggest that candidate was François Fillon, but it is believed counter-terror police acted quickly because Marine Le Pen is due to appear in Marseille on Wednesday.

This has not been confirmed by authorities.

Photos of the two men arrested on Tuesday were distributed to the security teams of candidates in the upcoming French presidential election, campaign sources told AFP. Conservative Francois Fillon was warned about the danger on Friday, an aide said. He added that only Fillon's security had been reinforced, suggesting that it may have been the Republicans candidate who was the target.

An aide to FIllon also told Le Figaro newspaper that the initial tip off about the plot came from British intelligence services.

Reports claim a video made by the two men in which they declared allegiance to Isis was found and that the front page of a newspaper showing the candidate they reportedly intended to target was also found in their possession. Sources close to the investigation have told French media they were ready to act “imminently”. They were arrested as part of an ongoing investigation into suspected terrorist and arms offences.

France's Minister of Interior Matthias Fekl said the pair were ready to carry out an attack on French soil “in the next couple of days.”

He provided little details about the alleged plot but said: “Everything would be done to ensure security around the elections”.

France has been on high alert ever since a series of attacks in 2015 and 2016 left over 230 dead in Paris and Nice. The recent attacks in London and Stockholm have only heightened worries.

Authorities have been particularly concerned that jihadists would try to target the presidential election, the first round of which is on Sunday.

Interior Minister Matthias Fekl has announced that 50,000 officers will be mobilized across the country's 67,000 polling stations to try to prevent any terror attack or other outbreaks of violence by extremist groups.

Fekl told The Journal du Dimanche on Sunday that the threat was “high and permanent”.

French police have made numerous arrests for suspected terrorist offences since the beginning of the year.

According to the Journal du Dimanche the DGSI intelligence services have warned the main candidates over “a specific threat to their security and on their campaign headquarters”.

Security has been tight at campaign events with snipers and specialist anti-terror police units being deployed at a François Fillon campaign event in Montpellier and bomb disposal experts checking venues ahead of each rally.

Polls have shown that voters are more concerned about unemployment and their spending power than terrorism or security, though analysts warn this could change quickly in the event of further bloodshed.

Anti-EU, anti-immigration candidate Marine Le Pen has sought to cast herself as the best defender of France against the threat of fresh attacks.

At a campaign rally in Paris on Monday night she declared the terror attacks of Nice and Paris would not have happened if she had been in power.

Marine Le Pen's headquarters were targeted by petrol bombs earlier this month. The attack was claimed by an anti-fascist group. There were also ugly scenes with anti-fascist protesters clashing with police ahead of Le Pen's rally in Paris on Monday night.

READ ALSO: 'Give us France back': Le Pen delights frenzied crowd in Paris with anti-immigration speech