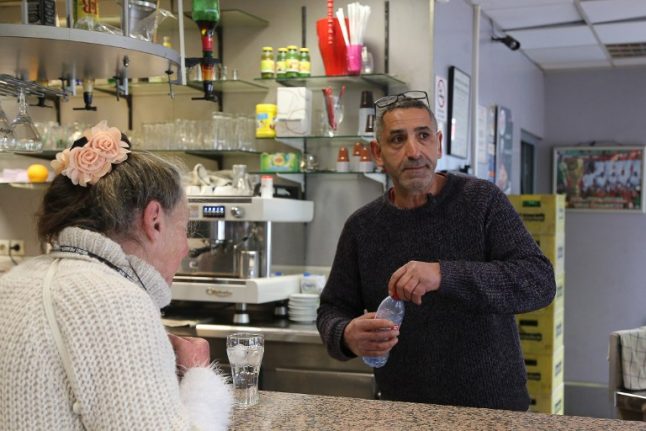 All photos: AFP
Amar Salhi is still amazed at how his scruffy bar north of Paris sparked an election scandal after it featured on national television in December during a report about Islam and women.
In footage shot with hidden cameras and broadcast during prime-time by state media giant France 2, two women activists were seen facing a hostile welcome as they tried to go for a drink in the Jockey Club.
“There's no mixing in this bar,” one client was heard saying.
“You're not in Paris here… it's a different mentality, it's like the village back home (in north Africa),” said another.
One of the women left disgusted, comparing the situation in the multi-ethnic suburb of Sevran to Saudi Arabia.
In a matter of hours of the report airing, social media lit up with comments, from members of the far-right National Front but also others across the political spectrum appalled by the sight of women's rights being trampled. A scene from the hidden camera footage. France 2
In the minds of some, the report appeared to crystallise widespread fears about the impact of immigration or Islamists imposing their rules in a country traumatised by a series of deadly terror attacks since 2015.
“Here's the result of decades of submission,” wrote National Front vice-president Florian Philippot.
Salhi's business became a punching bag as the Socialist party selected its presidential candidate in January, and has been a feature in speeches and debates ever since.
Even left-leaning centrist Emmanuel Macron, who talks admiringly of France's ethnic diversity, was still referring to the need to ensure “women can sit down on a cafe terrace” until recently.
His wife, a former school teacher, is said to have been shocked by the report.
“Everyone has been attacking me, everyone,” sighs Salhi, a welcoming 59-year-old Frenchman of Algerian origin, his voice hoarse and his face lined by lack of sleep.
Things started changing at the beginning of last month when the French media began casting doubt on the original investigation.
“It (the report) doesn't represent me at all!” the father-of-two added as several women mingled among his mostly male clientele who come to drink and bet on horse racing.
He is still appalled at how his business — and not unemployment, poverty or housing problems — had drawn so much attention ahead of the two-stage election this Sunday and on May 7. Minority within a minority
France has Europe's biggest Muslim community, estimated at around five million, a legacy of its colonial history in Africa and its desire for cheap labour in the booming post-war years.
Hakim El Karoui, the author of a major study on Muslims in France last September, believes the footage from the Jockey Club misrepresented the bar — but it was so explosive because it rang true.
“There are segregated areas in France, segregated because there are only immigrants there… where the cultural norms are of Africa, not of France in the 21st century,” he told AFP.
He believes successive governments have looked the other way as ghettoes built up and an aggressive strain of political Islam took hold, particularly among disaffected young people.
According to a survey that formed part of Karoui's controversial study for the respected Montaigne Institute last year, 28 percent of Muslims in France reject the values of the French republic.
“They are in favour of polygamy, they are against secularism, around 70 percent (of this minority) are in favour of women wearing the burka,” he says, reeling off the problems.
The study called “A French Islam is possible” also showed about half of Muslims in France (46 percent) were integrated fully, while another 25 percent were judged as conservatives somewhere between those two groups. Besieged community?
Following three major Islamist-inspired attacks since 2015, most election candidates broadly agree on the need to continue cracking down on radical mosques and being stricter on foreign funding of the religion.
But there is much wider, politically charged debate about French national identity and whether to go further with the country's strict secularism, which led to bans on veils and religious symbols in schools as well as the burqa in public spaces.
A separate survey in March by Ipsos showed that only 39 percent of respondents believed “the way Islam is practised in France is compatible with the values of French society.”
Yasser Louati, a campaigner against Islamophobia in France, sees the Jockey Club footage as more damaging stereotyping and warns about deepening the stigmatisation experienced by moderate Muslims.
“French Muslims feel like they are in a besieged fortress, they are constantly put in the spotlight,” he said.
Smail Khalid, a 47-year-old Frenchman of Moroccan origin who works at the Charles de Gaulle airport near Sevran, echoes this as he sits drinking coffee and smoking outside the Jockey Club.
“We're French here. I'm a republican, I love my country. But they're doing everything to screw things up so that we don't love it anymore,” he said.
by AFP's Adam Plowright
READ ALSO: Why France's Muslim voters are not all panicking about a Le Pen victory