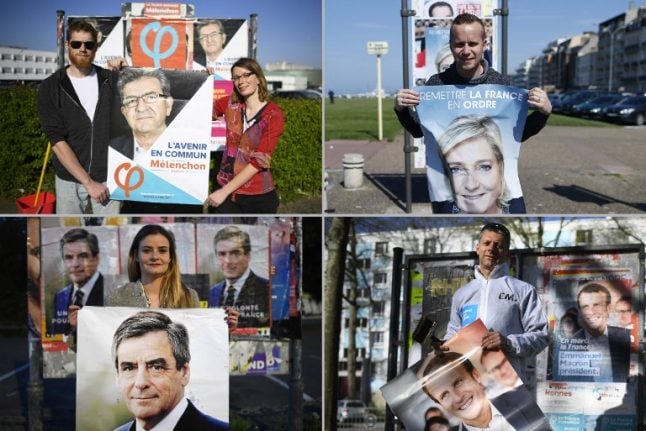 Photo: AFP
The 2017 French presidential race is entering the home stretch, with only days before the French head to the poll booths for the first round when voters will choose two candidates from a field of 11, who will go through to the crucial run-off two weeks later.
Here's what is going to happen in the lead-up to the most unpredictable election in the country's post-war history.
Final campaign events
After a wild weekend of campaigning, the top five candidates each have (or have already had) one last rally before the vote. Here's what we can expect from them, in order that they appear in the image below. François Fillon: His last rally was on Tuesday in Lille, northern France, but it's been revealed Fillon will spend the last day climbing a mountain near Chamonix in the French Alps. He wants to get some fresh air apparently.
Emmanuel Macron: Rally in Nantes, western France, on Wednesday at 5.30pm. More info here.
Marine Le Pen: Rally in Marseille on Wednesday night. More info here.
Benoit Hamon: The Socialist party candidate will rally the troops at the symbolic Place de la Republique on Wednesday evening.
Jean-Luc Mélenchon: He held several simultaneous rallies across the country on Tuesday night using his hologram.
One last big TV appearance (but not a debate)
There will also be one last live TV show featuring all 11 candidates, held from 8pm on Thursday on France 2. After the higgledy-piggledy mess of the past debate – where candidates all talked over one another – the format this time around will allow each candidate 15 minutes for a more personal interview.
Two and a half minutes are reserved for candidates to speak on a subject of their choice, while the rest of the time will be spent answering the TV host's questions.
If you're not sure who you would vote for, here is a closer look at what the top five candidates plan to do if elected.
But don't forget, there are 11 candidates in total, so read a lot more about the “other six” here (they're the ones pictured below, and are all polling around 1 percent or lower).
In clockwise order: Nathalie Arthaud, François Asselineau, Jacques Cheminade, Nicolas Dupont-Aignan, Philippe Poutou, and Jean Lassalle. Radio silence on Saturday
Candidates aren't allowed to campaign on the day before the election, with the official campaign period ending at midnight on Friday. So all those undecided voters can have a day in peace to consider who they think should be the next president of France.
And Saturday will also be a day without the relentless publication of opinion polls. Election rules say pollsters have to take a much deserved day off the day before the election.
Then on Sunday French people will go to cast their votes at the 67,000 polling stations around the country.
The booths will be open from 8am and they'll close at 7pm outside the big cities of France, or 8pm in the big cities.
Don't be surprised if you see a huge police presence around polling stations as well as the army with the government having mobilized 50,000 officers and troops to deal with the security threat, that was evident this week with the arrest of two men in Marseille suspected of plotting an attack around election time.
Where will the candidates be on election night?
Each of the candidates will be geared for their own election night event, or soirée électorale. And besides Marine Le Pen, they'll all be in Paris. Here's where you can find them.
Fillon: Palais des Congrès de Paris, a convention centre in the 17th arrondissement of the city.
Macron: Porte de Versailles, an exhibition centre in the 15th arrondissement of Paris.
Le Pen: The only candidate who will be outside of Paris, Le Pen will be at the Town Hall in Hénin-Beaumont, the former coal mining town in the north of France that is run by the National Front. The mayor of Hénin-Beaumont is Steeve Briois, one of Le Pen's chief aides.
Hamon: La Rotonde, near the Stalingrad and Jaures Metro stations, in the north east of Paris.
Mélenchon: Belushi's bar, at 5 Rue de Dunkerque near Gare du Nord in the 10th arrondissement of Paris. When will we know the result?

The tradition in France is that at 8pm all eyes turn to TV screens where the images of the two candidates who qualify for the second round will be displayed.

But things may be a little different this year. Previously voting stations (apart from those in the big cities) have closed at 6pm giving counters in the 250 designated polling stations on which the initial result is based, plenty of time to find out who is on top.

But this year those polls will close at 7pm, meaning the results given at 8pm on TV screens will only be based on a partial count. And in this year's tight election race it might not be possible to pick the two clear winners at such an early stage.

The partial results however will be rapidly updated throughout the night as counting continues so if we don't know for certain at 8pm we soon will.

With social media and foreign media who don't stick to the strict rules it's been hard in the past to keep the results under wraps until 8pm.

That's why you might see people wildly celebrating or groaning long before 8pm. French media can be fined up to €75,000 if they release the results before 8pm.

The two candidates who gain the most votes will advance to the second round. Technically, if a candidate was to get an outright majority of the votes at this stage, the second round would be called off and they automatically gain the presidency.
This is all hypothetical though, as no one has ever got over 50 percent in the first round.
The latest polls are suggesting that Le Pen and Macron will get through, although there is only a small margin separating Francois Fillon and Jean-Luc Mélenchon from the frontrunners.
When is the second round?
Sunday, May 7th is the date the French will return to the polls, this time the choice will have been narrowed down to two candidates, one of whom will become the next president of France.
This is when voting traditionally becomes more tactical, as those who voted for any of the defeated first round candidates will choose their “least worst” option out of the two remaining. With Marine Le Pen expected to make the second round we might hear a lot of talk of “faire barrage a”, basically referring to voters from the left and right uniting behind one candidate to block her from gaining power. When is the winner announced?
The crucial result will be announced once again at 8pm, when the image of the next president of France will be shown on TV screens, prompting either wild celebrations or groans of despair among the public.
Who will it be? Polls and bookmakers still reckon Emmanuel Macron is in the driving seat and Marine Le Pen will find it hard to get enough votes to pull off a shock victory. The tenacious François Fillon is still in with a fighting chance.
Once again the result is based on the votes counted in 250 designated polling stations around the country that are considered to be have an accurate cross section of French voters.
But once again with polling stations closing at 7pm instead of 6pm the counters in those designated polling stations will be under pressure.
Polls suggest the second round will give a clear winner, unlike the first round which is a four horse race, so partial results will be considered more accurate.
The inauguration
Whoever wins on May 7th will be inaugurated between eight and 13 days later, once they have set a convenient date with current president François Hollande.
There will be a formal “passing over of powers” as well as the traditional trip to the City Hall in Paris.
And then it's off to work for the next five years before we do it all again.
Want more? See our election section here