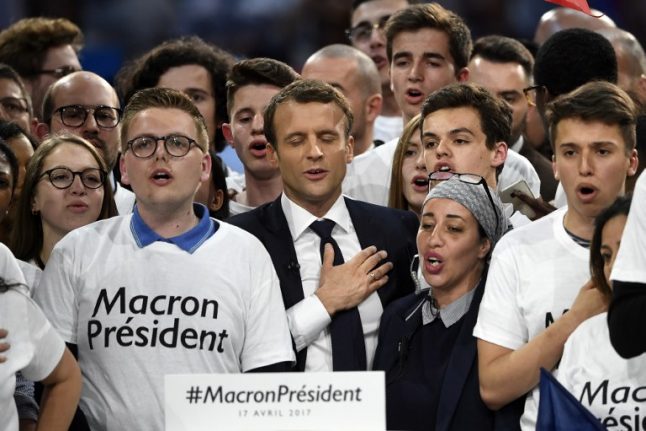 Photos: AFP
The 39-year-old Emmanuel Macron has come from almost nowhere, well the economy ministry to be precise to be the favourite to become the next French president.
Despite never having been elected and after only forming his own political movement, En Marche (On the move) one year ago, he will face Marine Le Pen in the second round run-off according to the initial results.
It might seem absurd, especially in France where they like their politicians to be familiar faces and preferably over at least 50, but when The Local spoke to many Macron supporters at a rally in Paris they were all convinced he was the right man to lead France. Good proposals for Europe
“Macron represents the renewal of the political class. He has good proposals for Europe, he is the instigator of François Hollande's good measures,” said Bilal Moudenfi, a 21-year-old delivery man in Paris.
Unifying
“He is unifying and wants to rally the France of the 'winners' with peripheral France,” says 33-year-old En Marche! supporter Emilie Guérel, who lives in Toulon.
“He wants to unify ideas and people,” 50-year-old Carolina Delattre added.
Inclusive
“Macron will be a president for all the French, one who will not discriminate. His project is inclusive,” said François Marien, 30, an advisor on disabilities to En Marche Inclusion.
“He can spot a good idea whether it comes from the right or the left. France has to be reformed with the French people. He defends Europe and I like that,” said 17-year-old high-school student Nadim Février.
France Lacourt, a teacher, said he'd vote for Macron “because he is a centrist”.
He will move forward
“I hope that Macron triggers a political renewal through his administration. No going backwards,” said 29-year-old school worker Célia Stieb.
Gisèle Loison, a 63-year-old teacher added: “He wants to innovate, not to repair what already exists as the others suggest.”
“He represents progress,” said 52-year-old En Marche organizer Denis.
“I wish my grand-children a better political future,” said 62-year-old Bernard Kervéadou. He will actually lead
“Macron would be a president that presides, in the original meaning of the word, far from usual games among parties. Furthermore, he is the only pro-EU candidate and we need Europe,” says Thomas Lajarge, 22, who studies Economics and Law.
“He is dynamic and modern,” added Gregori Novak, a teacher of 42.
“He represents a new dynamic that goes beyond your usual left-right divide,” 40 year old Charles Amson told The Local.
Economically realistic
“I expect from Macron an economical program that's realistic and socially fair,” said Alfred Eibenberger, 60, a scriptwriter.
“He's the one with the best economical program,” added 50-year-old Anne-Cécile.
He has youth on his side (he is only 39)
“He is young. He has good ideas to make France prosper and redistribute wealth. And he stands with Europe,” 58-year-old engineer Daniel Riou told The Local.
“The people surrounding him want to clean up the French political landscape – and he is young,” Frank, 50, told The Local.
“I believe in young people. He showed his capacities and his determination for a change. He come to demolish political casts and show that we can make it. I read his book, 'Révolution', it makes people want to believe that things can be shaken up,” said 62-year-old legal expert Jeanne-Marie Yala-Koum.
The lesser evil
“He is the lesser evil,” said Marie, 43, who works in finance.
“I can't vote yet, however we have to preserve France from the extremism of both Le Pen and Mélenchon,” said 16-year-old Anaïs.
Europe
“He is very much for Europe. I took the decision to vote for him a month ago. We need more young people in politics, he can bring the necessary change,” Nelly, aged 61, said.
“He's the only one who understands that we needed, not less, but more Europe”, said Alexandre Durand, 32, a law student.
By Elisabeth Beretta