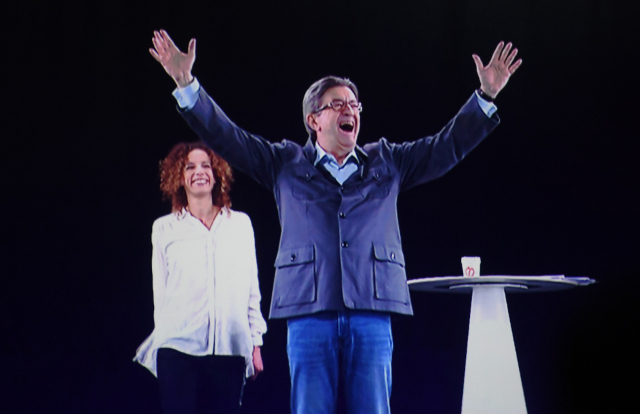 All photos: AFP
French presidential candidate Jean-Luc Melenchon made a return to hologram campaigning Tuesday, beaming himself and his far-left message to six cities as far away as the overseas territory of Reunion.
For his last major rally before Sunday's nailbiting first-round vote, the resurgent leftwinger killed seven birds with one stone by transmitting his onstage appearance in Dijon to crowds in Nancy, Grenoble, Montpellier, Clermont-Ferrand, Nantes and Le Port on the Indian Ocean island of Reunion.
The Communist-backed firebrand has made a surprise breakthrough in recent weeks, with polls suggesting he has a shot at a place in the May 7 run-off as the race has dramatically tightened.
Far-right leader Marine Le Pen and centrist Emmanuel Macron have led for weeks, but polls now show a four-way race with the two frontrunners tied on 22-23 percent, conservative Francois Fillon on around 21 percent, and Melenchon surging as high as 20 percent.
Melenchon and his holograms used Tuesday's rallies to hammer home his programme, which includes huge spending increases and a pledge to renegotiate all European Union treaties, to crowds totalling 35,000 people across France, his team said.
“The people's programme is about being able to live off your work with dignity, to be looked after when you're sick, to be able to stop working when it's time,” he said.
And he took a swing at the super-rich, deadpanning: “Being a billionaire does nothing for personal happiness. It's just an accumulation of worries, which we'd want to take away.”
Melenchon's programme promises greater job protection and a 100-percent tax on personal earnings over and above €400,000 ($430,000).
He denied that his euroskeptic stance amounted to wanting to leave the bloc, saying: “Don't believe what they tell you.”
A tech-savvy campaigner with more than a million Twitter followers, Melenchon turned heads in February when he first made simultaneous hologram appearances at campaign rallies, a first for a French presidential campaign.
Francois Fillon was in Lille in northern France for his last rally on Tuesday night, though he continues to make headlines for everything besides his policy. It was revealed on Tuesday that he may have been the target of a foiled attack on Friday.
In a statement about the arrests, Fillon praised the security services “which stopped these people suspected of planning an attack linked to the presidential election”.
At his rally in Lille, which was held under tight security, he told his supporters that “We are going to flip all the scenarios people are coming up with, and I feel we are going to make history.”
A confident Fillon said he thought Macron was his “likely competitor” in the second round, adding that the 39-year-old centrist was “in pursuit of Hollandism”, once again comparing Macron to current president Francois Hollande.
Fillon, a 63-year-old former prime minister, has long been in the news over allegations he gave his wife Penelope a fictional job as his parliamentary assistant for which she earned nearly €680,000 ($725,000) in public money.
Having led the polls at the turn of the year, the scandal hit his support hard.
But voters now appear to be warming to his message that he is a safe pair of hands in an election of largely untested candidates.