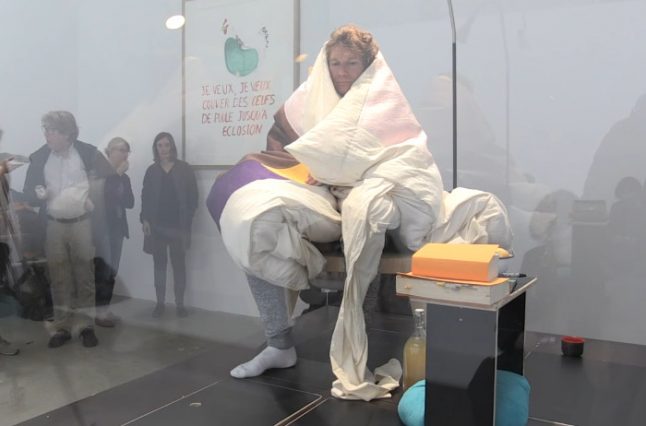 Photo: AFP
Abraham Poincheval — who made headlines last month after spending a week entombed inside an egg-shaped rock — has hardly slept since he stepped inside a glass vitrine in a Paris modern art museum to sit on the eggs on March 29.
But late on Tuesday afternoon the first of the eggs began to hatch, forcing the artist to temporarily rise from his nest for fear of crushing the new-born.
Up until then Poincheval was only allowed a half-hour break every 24 hours to keep him from cracking — although he never once left the glass case in the Palais de Tokyo.
Here's a live feed of his efforts.
“It has been really tough for him. He has slept sitting on the eggs. It's been a lot harder than being shut inside the rock,” a spokeswoman for the museum told AFP.
What is more the 44-year-old has had to contend with the heat, having to keep the eggs at a minimum of 37 degrees Celsius (98.6 degrees Fahrenheit).
He has also been all but cut off from the outside world. “His voice is quite muffled through the glass,” the spokeswoman added. “It is quite frustrating to communicate sometimes.”
From the start, Poincheval — dubbed France's most extreme artist — appeared far more daunted by the performance than his claustrophobia-defying spell inside the rock.

Cooped up
Cooped up in one corner of the vitrine in a heavy traditional Korean cape on a specially designed “laying table”, the usually amiable artist avoided the gaze of gallery goers and retreated into himself.
However, as cracks appeared in the first of the eggs, his spirits lifted.
Now bearded, he could be seen checking on the eggs every few minutes on the museum's live YouTube feed and talking with museum staff.
His ordeal is far from over, however. Although the chick has cracked a large hole in the top of its shell, it has shown no sign of wanting to leave it.
And its nine siblings must also hatch before Poincheval can go home to his two human children.
“The chicks will stay with Abraham inside the vitrine for 72 hours,” the museum's spokeswoman said.
“He will not feed them for the first 24 hours until their bowels clear and he has enough feed for them inside the vitrine for their first 48 hours of life,” she added.
Only then will he have the right to quit the run with his “offspring”, which he has already vowed will never end up in a casserole.
His father Christian had earlier told AFP that as a child Poincheval had a pet chicken.
He also revealed that the “hen-men and hen-women” his son brings into the world will be allowed to live out their natural lives on his smallholding in the west of France.

Chickens to be spared pot
“I have prepared everything to welcome the chicks including a luxury chicken coop. I can assure you that they will never be the centrepiece of a grand feast,” said Christian Poincheval, an inventor best known for pills that make farts smell of roses.
His son had said earlier that he was inspired by a tragicomic short story by the French writer Guy de Maupassant.
In “Toine”, a bad-tempered farmer's wife gets revenge on her idle bon vivant husband by using his body to keep her chickens' eggs warm when he is paralysed by a mysterious malady.
Poincheval is no stranger to bizarre performances.
He once spent a fortnight inside a stuffed bear eating worms and insects, was buried under a rock for eight days and navigated France's Rhone river inside a giant corked bottle.
His big dream, however, is to walk on the clouds.
“I have been working on it for five years, but it is not quite there yet,” he said.