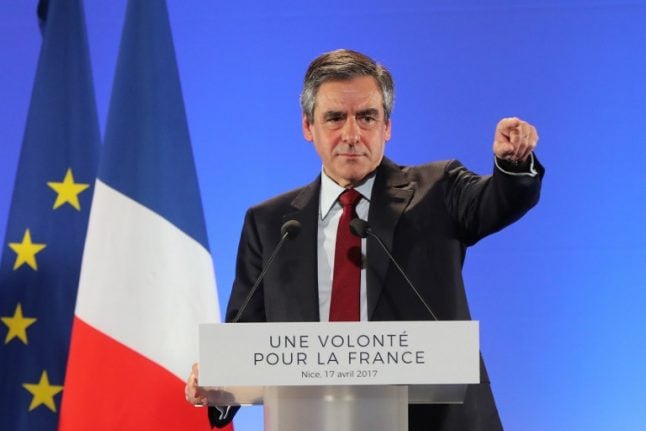 Photo: AFP
Two men suspected of plotting an “imminent” terror attack in France were arrested in Marseille on Tuesday – and reports say that that it was in connection with a threat against conservative candidate François Fillon.
Fillon's latest rally in Montpellier on Friday was heavily guarded after police “acted seriously on a terror threat”.
The paper reported that at the rally, where 4,000 turned up to hear Fillon speak, security was so tight that it was hard to get in.
It reported the presence of snipers, elite police, armed military, and Swat forces – all on top of the usual security forces.
However despite the tension, it was unclear at the time whether it was linked to intelligence about a specific terror plot.
A police source told L'Express newspaper on Tuesday that even there was greater security around the Montpellier rally it did not mean they expected the event to be attacked by the two suspects, named as Clément Baur and Mahiedine Merabet.
The source said the extra security was more to do with the threat that an attack could take place at Easter.
Conservative Francois Fillon was warned about the danger on Friday, an aide told Le Figaro newspaper, adding that the initial tip off about the plot came from British intelligence services.
French authorities searched a Marseille apartment connected to the suspects, and found three kilos of explosives, several guns and an Islamic State jihadist flag during an apartment raid, said Paris prosecutor Francois Molins.
Police also reportedly found a photo of one of the suspects in front of an Isis flag, holding a gun and the front page of  an edition of Le Monde newspaper showing Fillon, reported BFM TV.
The picture below shows the newspaper that was found, according to L'Express newspaper. Fillon at the Montpellier rally. Photo: AFP
Counter terror police have increased the risk level of an attack targeting Fillon to two on its four-point scale, of which 1 is the highest warning, reported France TV Info.
But the fact police gave the photographs of the two suspects to the security teams of Emmanuel Macron and Marine Le Pen suggests they were either not quite certain which candidate they had in their sights or more likely just that they were taking no chances.
It's not clear why the pair, who were from northern France were in Marseille. The far right presidential candidate Marine Le Pen is due to hold a rally in the city on Wednesday.
The two arrested suspects, aged 23 and 29, were known to police for being radicalized and both come from the north of the country.
Sources close to the investigation have told French media they were ready to act “imminently”. They were arrested as part of an ongoing investigation into suspected terrorist and arms offences.
France's Minister of Interior Matthias Fekl said the pair were ready to carry out an attack on French soil “in the next couple of days.”
He provided little details about the alleged plot but said: “Everything would be done to ensure security around the elections”.
France has been on high alert ever since a series of attacks in 2015 and 2016 left over 230 dead in Paris and Nice. The recent attacks in London and Stockholm have only heightened worries.
Authorities have been particularly concerned that jihadists would try to target the presidential election, the first round of which is on Sunday.
Interior Minister Matthias Fekl has announced that 50,000 officers will be mobilized across the country's 67,000 polling stations to try to prevent any terror attack or other outbreaks of violence by extremist groups.