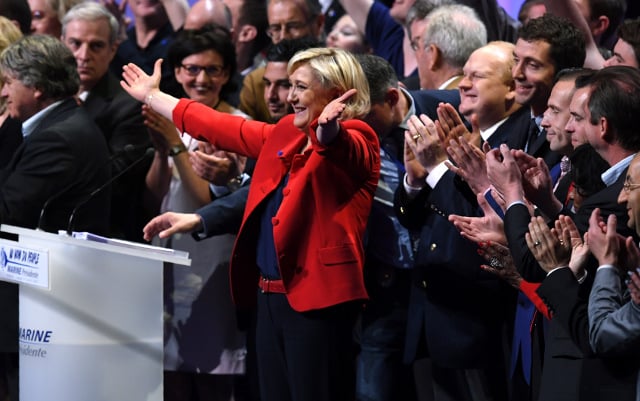 Photo: AFP
Anti-fascist demonstrators briefly scuffled with police outside the Zenith hall in northeast Paris before Le Pen held her rally.
But inside the venue, an energetic crowd was on hand to hear Le Pen speak just six days before the election.
In an hour and a half speech Le Pen focused on her core themes of identity, Islam and immigration, which she said was “not a chance for France but a tragedy.”
The National Front (FN) leader promised to tighten France's borders and crack down on immigration, adding that “behind mass immigration, there is terrorism.”
“Give us France back. I have heard this appeal everywhere I have been,” she said adding that the “French were no longer at home in France.”
She vowed to change the law so people could not just become French “by accident”.
She promised for the first time to even introduce a moratorium on legal immigration.

And as for the burkini… “It's not a religious garment, it's an Islamist provocation,” says Marine Le Pen to wild cheers. #MarineAParis

The flag-waving crowd chanted “This is our home” and “France for the French” as Le Pen laid out her tough stance on immigration.

“To be French is a privilege…that's why we need national priority for jobs and lodging,” says Le Pen. #MarineAParis pic.twitter.com/xzCvCCZLj3

She said that her first measure as president would be to restore France's borders. “It will be done the day after I take power she told the cheering crowd, who responded with chants of “This is our home (on est chez nous) and “France for the French”.
She also raised cheers every time she criticized what she refers to as fundamental Islam saying in “France we would not make women hide behind the Muslim veil”.
She also took aim at the burkini, which she said was not a “religious garment but an Islamist provocation”.
She promised to cap the number of legal immigrants in France at 10,000 a year, and said the Paris and Nice terror attacks wouldn't have happened if she were president.

Marine Le Pen says first measure as president would be to restore France's borders. “Immigration is not a chance for France its a tragedy” pic.twitter.com/qBEDDvbvGX

Le Pen basically says foreigners in France who behave themselves and live here with dignity have nothing to fear from her presidency. Phew!

Fifteen minutes into her speech, a female protester from feminist group Femen burst onto the stage clutching a bunch of flowers, before apparently trying to take off her top before she was bundled away by security guards (see video below).

“These left-wing extremists have got it all wrong,” Le Pen said. “A total inversion of values has disrupted this speech by the only woman who defends women.”

Another topless protester, reportedly also from Femen, briefly interrupted the talk a little later.
Le Pen's return to her core themes comes as she has lost a little ground in the polls. Although she is still predicted to make the second round her lead over third place Fillon, once at eight points, is now down to just two percentage points in some polls.
Also on Monday, centrist Emmanuel Macron, who is expected to meet Le Pen in the second round, staged his biggest rally of the campaign so far, attracting 20,000 people to the Bercy national indoor arena.
Macron delivered an upbeat speech that focused on his vision of France in five years' time.
“We are going to turn the page on the last 20 years because our generation is ready for change,” he told a crowd who chanted: “We're going to win.” 'We need the EU'
The 39-year-old former Rothschild banker and economy minister gave a strong defence of the European Union in the face of attacks from Le Pen, who wants to withdraw from the bloc.
“We need Europe, so we will remake it,” Macron told the crowd. “I will be the president of the awakening of our European ambitions.”
His European Union would be “less bureaucratic” and would protect both “industrial and agricultural interests”, he vowed.
In a reference to Le Pen, Macron said French voters had the choice of “hope and courage over resignation”.
After weeks of twists and turns, the unpredictable race has narrowed dramatically, with surveys suggesting four candidates are in contention to win one of the top two spots in the vote on Sunday and progress to the run-off a fortnight later.
Scandal-hit conservative Francois Fillon and radical leftist Jean-Luc Melenchon are steaming up behind the two frontrunners, and with around one in four of the electorate still undecided, candidates are scrapping for every vote.
The fast-growing score of Communist-backed Melenchon — and the possibility he could square off against Le Pen in the May 7 decider — has sparked alarm over the future of the EU as both advocate leaving the bloc.
Some observers predict that if Le Pen becomes president it could strike a mortal blow to the EU, already weakened by Brexit.
Dominique Dusart, 57, who heads Macron's En Marche (On the Move) movement in the Yonne area south of Paris, admitted supporters were worried his support could fall off in the crucial final days.
“We're a bit worried by Melenchon's breakthrough,” she said. “It has been a bit of a slap in the face because we weren't expecting it.”
Melenchon's canal cruise
Melenchon, 65, chose the quirkiest campaign event of the day, sailing through northeast Paris on a barge, making stops along the way to greet supporters.
Addressing supporters from the boat-deck, the leftist railed against the “fear mongering” of his rivals and the media about his big-spending programme and sympathies for the leaders of nations like Cuba and Venezuela.
“They make up things about us on a daily basis,” he complained. “Keep the fire of rebellion burning inside you,” he urged. For his part Fillon, dogged by a fake jobs scandal that has seen him charged with abuse of public funds, said he was confident he would upend the polls.
“I can see things clearly. I am absolutely sure I'll be in the second round because there is a strong desire for change in our country and I am the only one proposing serious and reasonable change,” the 63-year-old told reporters in the southern city of Nice before giving a speech to supporters.
France goes to the polls on April 23rd and then again on May 7th for the second round.