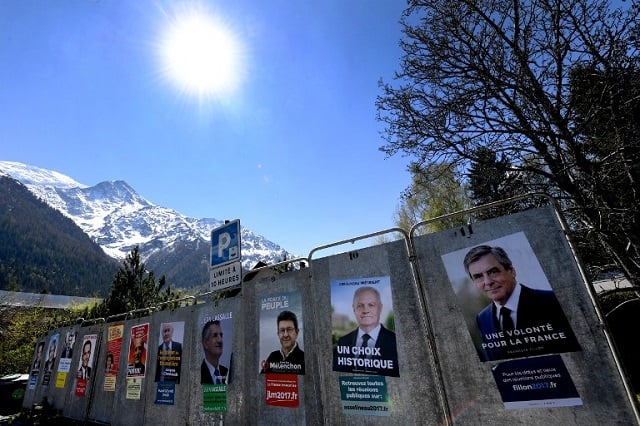 On April 23rd, the French go to the polls in the most unpredictable vote in the country's post-war history to choose two candidates from a field of 11 who will go through to a run-off two weeks later.

With a duel between far-right leader Marine Le Pen and Communist-backed radical Jean-Luc Melenchon, both eurosceptics, among one of six possible outcomes the election is being closely watched in Brussels and around the world.

Opinion polls show one in three voters still undecided about who to back after a campaign characterised by scandals and upsets. In an interview in Le Parisien newspaper on Sunday, 65-year-old Melenchon, who is threatening to quit the euro and massively increase public spending, vowed he would be a safe pair of hands on the eurozone's second-largest economy.

“I am not from the far left,” the leader of the La France Insoumise (Unbowed France) movement said, insisting he was “ready to govern”.

Melenchon's surge has shaken up the race, with many hesitating between voting with their hearts and a tactical vote for whichever candidate they see as best placed to keep Le Pen or Melenchon out of power.

Le Pen, whom polls show leading the first round with centrist Emmanuel Macron on around 22-24 percent each, returned to her party's core themes of immigration and Islam Saturday to try to mobilise her base.

The opinion polls had shown her virtually assured of a place in the May 7th runoff but Melenchon and the conservative Francois Fillon have narrowed the gap with her and Macron to about three points, blowing the race wide open.

In a speech in the southern city of Perpignan the 48-year-old National Front (FN) leader lashed out at Macron and Fillon, accusing them of being soft on radical Islam.

“With Mr Macron, it would be Islamism on the move,” Le Pen said, in a play on the name of Macron's En Marche (On the Move) party, calling the 39-year-old champion of diversity “unscrupulous”.

Casting herself as the best defender against the jihadists who have killed over 230 people in France since 2015, Le Pen also tore into Fillon, accusing him of letting ultraconservative Islam gain ground when he was prime minister between 2007 and 2012.

The election has revealed high levels of angst over a perceived erosion of French identity, which Le Pen has pinned on immigration, particularly from Muslim North Africa.

In an Ifop-Fiducial poll for Le Journal du Dimanche (JDD) newspaper 86 percent of FN voters said they “no longer feel at home” in France and 73 percent considered Islam incompatible with the French Republic.

But the poll also showed Le Pen, who has spent years trying to detoxify the FN's image, still struggling to win over the absolute majority of voters needed for victory in a run-off.

Three-quarters of non-FN voters said the party as “dangerous for democracy” and four out of five found it “racist”.

Fillon, who is on the rebound from a damaging expenses scandal that had caused some of his voters to switch to Le Pen or Macron, used Easter to mobilise his traditionalist Catholic base.

“Patriotism is not a dirty word,” he told supporters in the cathedral town of Puy-en-Velay on Saturday – borrowing from the songbook of Le Pen who styles the FN the “party of patriots”.

In an interview published Sunday, the 63-year-old former prime minister, who refused to bow out despite being charged with misusing public money over payments to his wife, said he was convinced the scandal was behind him.

“I know I will be in the second round,” he told the JDD.

If elected he would “unite everyone” and “wipe the slate clean,” said Fillon, who has accused the left, the judiciary and media of fomenting the expenses scandal to try to derail his presidential bid.

The presence among the top four of two anti-globalisation candidates who have threatened to take France out of the euro – Le Pen and Melenchon – has caused jitters among investors.

During a visit to the World War I battlefield of Chemin des Dames on Sunday, outgoing Socialist President Francois Hollande warned against “scapegoating Europe” which had “protected us against war”.