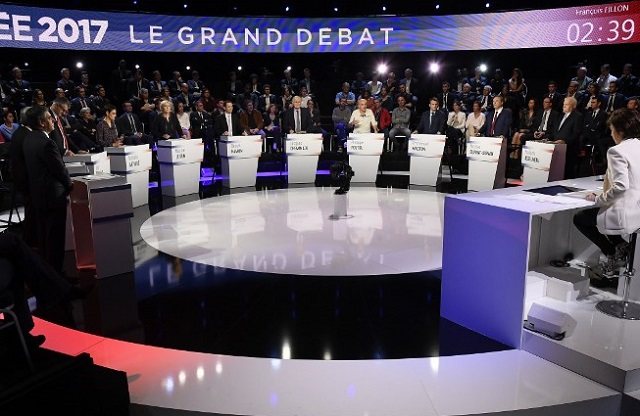 The 11 candidates taking part in the debate earlier this month. Photo: Lionel Bonaventure/AFP

This is how the many undecided voters view this year's cast of candidates.

Marc Jaurena lives in the northeastern city of Metz but drives nearly an hour to work in Luxembourg, 63 kilometres (40 miles) away.

“For me, working in Luxembourg, my job will be directly impacted by a Marine Le Pen election,” Jaurena said, as the far-right leader has pledged that, if elected, she will pull France out of the euro currency and hold a referendum on whether the country should leave the EU.

The 34-year-old Jaurena said he has also been scandalized by the fake jobs scandals that have embroiled not only Le Pen, but also Fillon.

Fillon's campaign has been rocked by multiple scandals over expenses and conflicts of interest,
including allegations that he gave his wife suspected fake jobs as a parliamentary assistant, for which she was paid a total of 680,000 euros ($725,000).

As for Le Pen, the European Parliament has accused her far-right National Front (FN) of using funds allotted for parliamentary assistants to pay staff for party work in France.

She has dismissed the investigation into FN's expenses, saying it is a plot to derail her campaign bid.

Jaurena is also unmoved by the ethos of the Communist-backed eurosceptic Melenchon, and by what he called Macron's “brainwashing”.

He is among the nearly 40 percent of voters who have yet to decide which way they'll vote – or even if they'll show up at on election day on Sunday.

“This election is unusual. The campaign is rocked by scandals,” political scientist Richard Kleinschmager told AFP.

“The situation has become too complex to get people engaged”.

Voters' indecision has reinforced the uncertainty of this year's two-round presidential election, in which four candidates – Le Pen, Macron, Melenchon and Fillon – are polling between 17 and 26 percent of the vote, according to a study published the 19th of April.

The top two candidates from that vote will go forward to the second-round run-off on May 7th.

“For me, it's unclear,” said 41-year-old Fabrice Blanchard, a commercial agent in Lorraine. “Macron, we don't know if he is of the right or the left”.

As for Hamon, “he is from the outgoing government,” which has been marked by high unemployment and low growth.

Only 17 percent of voters questioned in an Ipsos poll in February gave high marks to France's democratic system.

In the western city of Rennes, Pierre, 28, voted for the then president Nicolas Sarkozy in 2012, but he is leaning towards Macron this time around, “because he's young”.

But for retired teacher Jeannette, 77, who is among the undecided voters, said Macron is “too young”.

“Undecided voters are a feature of this election,” Kleinschmager said. “Voters from the two major parties have been thoroughly weakened.”

Francoise, the daughter of a former mayor in the eastern province of Franche-Comte, said she would have voted for Fillon “if there hadn't been the scandals”.

“Honesty in life and in politics, it's essential,” the 54-year-old pharmaceutical worker said.

“My father was mayor of a town, and when I made copies at city hall, he took out money to pay for them.

“So then when we see the Fillon family… I am outraged by the scandals”. There is a danger in having so many undecided voters at this late stage, said Kleinschmager.

“The danger is when we don't know what to hold on to,” he said. “So we grab a lottery ticket while telling ourselves 'why not'. That lottery ticket is Marine Le Pen”.

By Christian Spiller with AFP's bureau in Rennes