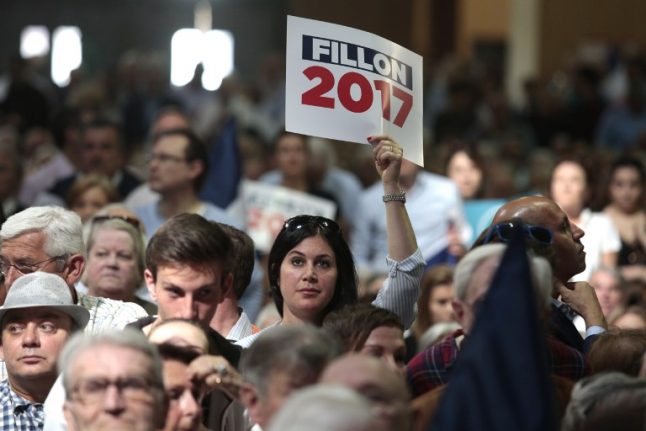 All photos: AFP
Polls suggest some 65 percent of France's 47 million voters on the electoral roll will cast a vote on April 23rd in the first round of the presidential election.
The same polls currently say some 20 percent of those will vote for François Fillon, but it may be well more when voting day comes around. At least Fillon is confident it will be more.
So what do we know about the millions of French expected to back a candidate who has been plagued in recent months by a scandal that has seen him accused of employing his wife as a “fake” parliamentary assistant for which she earned hundreds of thousands of euros.
The typical voter
“The typical Fillon voter is typically a mature right-wing voter, belonging to the top sociological classes in France. This means entrepreneurs, company leaders, CEOs company owners, and shopkeepers. They're Catholic and they're conservative,” said Bruno Cautres, French political analyst from the Cevipof think tank.
Here's a closer look at these voters, and how it will affect Fillon's chances at becoming France's next president. The older vote
Fillon will pick up 51 percent of the votes from people aged 65 plus, at least according to a recent survey from the pollsters at Opinion Way.
Other recent surveys have found a similar trend, and it's way above the 18 percent of the general public's vote that he is expected to get.
Of the people who say they will definitely vote for Fillon, 47 percent are over 65, according to a Cevipof poll. So why?
Frenchman Philippe Marliere, who is a professor in French politics at UCL London, says that older voters in France tend to lean right.
“Traditionally the older you get the more conservative you vote, and that's not just in France,” he told The Local.
“When you're retired and belong to baby boomer generation, you have a good time in retirement, even if lower middle class you get by fine in France.”
Marliere added that older voters who plan to vote right appear not to like their other options: Macron, a centrist who is seen as a product of the left, and Marine Len, who is actually extremely unpopular among the older voters. In fact, some polls put Le Pen's support among over-65s as low as 8 percent.
Older people feel they wouldn't be affected by an increased retirement age and they don't fear the 500,000 cuts to public sector jobs, both of which have been campaign promises from Fillon.
The younger voters aren't particularly interested
A recent Ifop poll showed that only 11 percent of 18-25-year-olds would vote for Fillon.
That score ranks Fillon fifth, behind Le Pen (29 percent), Macron (28 percent), and even behind Benoit Hamon and Jean-Luc Mélenchon.
Fillon is well aware of it too, telling the tens of thousands who gathered to hear him speak at the weekend:
“I want to tell the 20-year-olds that I am fighting for them and that I need them,” he said.
Whether they will listen is another thing. Bruno Cautres says it's unlikely many youngsters will cast a vote for Fillon.
“When it comes to younger voters, the less educated of them, the type working part-time jobs or unemployed, will vote for Le Pen. Those with a higher education will back Macron,” he said.
“They certainly won't vote for Fillon.
The party faithful
The one group of people certain to back Fillon – no matter what – are the hardcore Republicans party faithful, says Marliere.
“The traditional conservative constituency will always vote for Fillon, they won't think too much about the scandals,” he said.
He added that at the last minute, traditionally conservative voters will stick with their typical voting habits, even if they may say they are unsure of who to vote for now.
Unfortunately for Fillon, however, he hasn't done much to attract the rest.
“He has had to waste so much time on television defending himself with these scandals that he hasn't managed to siphon off the far-right voters, like Nicolas Sarkozy did, especially in 2007,” Marliere said. The Catholics
Fillon clearly benefits from the support of Catholics in France, according to a Cevipof poll.
In fact, of the people who say they will certainly vote for him, a whopping 84 percent say they were Catholic.
“Devout Catholics would go for conservatives like Fillon, and he plays this card too,” says Marliere.
Indeed, Fillon has the support of religious groups like Sens Commun who will him in his push to abolish the gay marriage bill, or at least alter it.
“But it's only a minority of French people that are so deeply integrated into Catholicism and Fillon can't win an election with that,” Marliere said.
Exactly whether this will have any effect whatsoever remains unclear, but the Catholic connection was noted during his surprise success in the primaries.
Others were quick to point out that the voter's choices ran almost perfectly parallel to Catholic voter's choices – and that religion essentially made no difference.
But, let's not forget that almost two thirds of French people declare themselves as Catholic, if not practicing – and that includes the devout Catholic candidate Fillon.
France has a long tradition of laïcité – the non-interference of religion in state matters, but the Catholic church remains a powerful institution in society and this could play to Fillon's advantage. The “hidden voters”
There has been a lot of talk in this election about the “hidden vote” (le vote caché), meaning people who have not revealed their true intentions to the pollsters or more to the point not even to themselves.
And Fillon's team is convinced that many of their actual voters aren't saying it out loud, presumably because they don't want to be associated with a scandal-ridden candidate.
“People don't necessarily want to say that they're going to vote for Fillon, even if it's a sure thing,” Republican MP Valérie Boyer told BFM TV recently.
Ifop Pollster Jerome Fourquet, who joined joined Lecerf and Opinion Way's Frédéric Micheau for a grilling by the Anglo American Press Association of Paris, said Fillon could benefit from an “army of reserves who will reveal themselves at the last minute”.
So who are these hidden voters? And do they actually exist? Who knows.
But come election day, Fillon's team is convinced that his result will not reflect the current polls. (And here are another seven reasons Fillon is convinced he will win).
There are two problems with the hidden vote theory, however. One is that Le Pen voters might have the same approach (too scared to admit it but will vote anyway), and the other is that polling companies say it's rare that people lie in the polls, especially now it's possible to do so anonymously online. Where are the Fillon supporters?
“You'll find his voters in the regions of France where they typically vote right,” said Bruno Cautres.
“In the rural parts of western France – outside of the bigger cities which tend to be Socialist – as well as in parts of central France, the south east, and the east.”
But unlike Marine Le Pen – who has strongholds in the north and south east of France – or Emmanuel Macron – who is the top candidate in three regions, Fillon supporters don't have any clear strongholds and are fairly evenly split across the country.
He is not the top candidate in any of the 12 regions of mainland France.
His highest level of support is in Pays de la Loire where around 23 percent of voters say they'd choose him. This is still only enough to land him in second place for the region, after Macron at 25 percent.
His lowest scoring region was in Hauts-de-France in the north, a National Front stronghold at 35 percent, where only 14.5 percent of voters say they'd tick Fillon on election day.
He typically draws in around 18 to 20 percent of support in each region, and is always in second or third place.
So can Fillon advance through to the second round?
Unlikely, says Philippe Marliere.
“I wouldn't write him off just yet,” he told The Local.  “But I think on the whole his chances seem very slim indeed.”