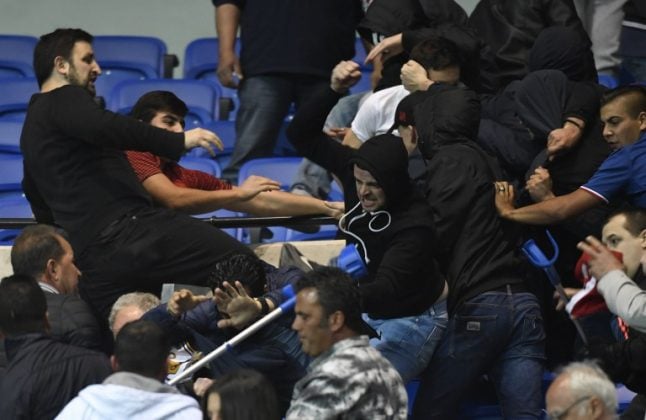 All photos: AFP
The start of the quarter-final first leg was delayed by 45 minutes as officials attempted to clear the Parc OL playing area of fans, many of whom had already run a gauntlet of violence outside the ground where police used teargas to quell outbreaks of fighting and vandalism.
The incidents were the latest in a black week for European club football after the Borussia Dortmund team bus was attacked with explosives on Tuesday just before their Champions League game at home to Monaco.
In the aftermath of that incident, which pushed the game back by 24 hours, UEFA had demanded a re-evaluation of the security measures “wherever necessary”. According to an AFP reporter at the Lyon ground, Lyon supporters poured onto the pitch as they attempted to protect themselves from firecrackers and other objects raining down from the stands above.
Lyon president Jean-Michel Aulas was subsequently seen calling for calm inside the stadium via a loudspeaker.
As the match — which Lyon won 2-1 — progressed, blame for the violence was already being apportioned.
Turkish president Recep Tayyip Erdogan, who faces a referendum on Sunday which could expand his powers, told NetTV: “If the French (fans) went onto the pitch then that's very dangerous.”
One Lyon fan, who gave his name as Amin, said: “It is the first time I have ever seen anything like this here.” Earlier, Turkish fans had clashed with security forces in Lyon, leaving a stadium steward injured, an AFP photographer reported.
“The Turkish supporters charged at a steward and injured him,” he said. “The supporters are waving big Turkish flags.”
Trouble also erupted between rival fans outside another entrance to the stadium as smoke billowed from tear gas canisters.
A group of Turkish fans from Germany had smashed a pair of glass doors at the club megastore after they were unable to purchase tickets to the sold-out match.
Turkish pro-government media were blaming French fans for the trouble. “The Lyon hooligans attacked children,” said the Yeni Safal daily newspaper, with a picture it said showed a French fan waving a crutch in the direction of a child.
Sabah, another pro-government daily website, claimed: “Lyon hooligans attacked the Turkish fans, including women and children and afterwards the Besiktas fans responded.”
Authorities categorised the match as maximum risk with 1,000 stewards drafted in for the encounter.
Around 15,000-20,000 Turkish fans had been expected in Lyon for the game taking place at a stadium situated in an area of the city which is home to many people of Armenian origin.