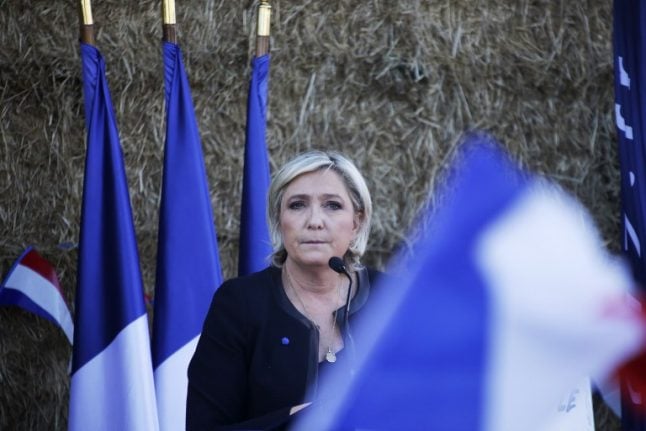 Photos: AFP
The demand was made at the end of last month after she invoked her parliamentary immunity in refusing to attend questioning by investigating magistrates on March 10 over fictitious jobs for parliamentary assistants within her Eurosceptic Front National party.
Le Pen shrugged off the request, saying it was “normal”.
“It's totally normal procedure, I'm not surprised,” she told France Info radio.
Le Pen, who is one of the frontrunners in the race, has said in the past she refused to be questioned by anti-corruption investigators during the presidential campaign, as “there cannot be the neutrality or calm necessary for the justice system to function properly.”
Le Pen's personal assistant Catherine Griset was charged in February with breach of trust in the probe into allegations that her National Front (FN) party defrauded the European Parliament of about €340,000 ($360,000).
Le Pen, who sits in the European Parliament, has furiously denied accusations she broke the rules by using parliamentary funds to pay Griset as well as bodyguard Thierry Legier for jobs in France rather than at the European Parliament. Le Pen, who has vowed to call a referendum on France's membership of the European Union if elected, has described the investigation as a vendetta.
She is not the only presidential candidate facing accusations over 'fake jobs'. Her conservative rival Francois Fillon is fighting claims he paid his wife more than €700,000 for parliamentary work that she might not have carried out.
However while Fillon's popularity has been hit hard by the scandal analysts suggest that Le Pen's own supporters are unlikely to be turned off by the allegations the National Front broke EU rules.
For a start, and in contrast to Fillon, it does not appear Le Pen gained personally from the rule breaks and given her supporters are firmly anti-EU anyway, analysts suggest most of them will see little wrong in what the party has done.
Plus the investigations tie into her long-stated argument that her party has been the victim of a witch-hunt by the establishment and mainstream media.
Polls currently show Le Pen will get enough votes in the first round of the presidential election on April 23 to carry on to the second, where she would be beaten by either Fillon or centrist Emmanuel Macron in the runoff.