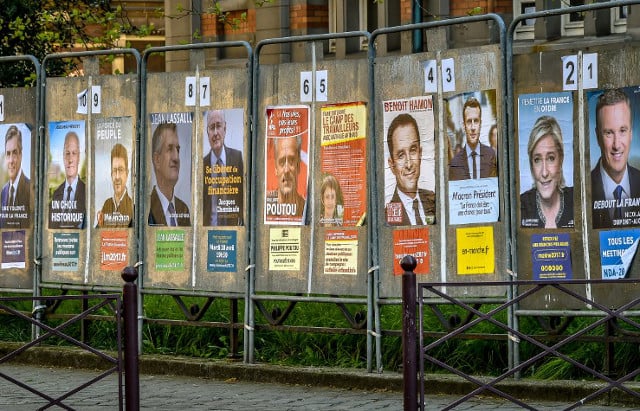 “I pay my taxes in France, so I should have the right to vote here.” It’s a common thought among EU expats living and working all over France from Paris to Provence and from Brittany to Burgundy.

Surely EU citizens (let's include the UK for the sake of argument and for the fact they haven't actually left yet) who lived in France for years should be allowed their say on whether the anti-EU, “French First', Marine Le Pen becomes the next president of France or not?

Or indeed whether the “French Maggie Thatcher” (François Fillon) or the “French Tony Blair” (Emmanuel Macron) become the head of state for that matter.

The current laws allow citizens from EU countries to vote in European and local elections but not national ones.

So Brits, Irish, Germans or Spanish plying their trades in France get a say over who the local mayor is but will have no influence over who will be France’s president nor who will stand in parliament.

Effectively that means they can have a say on whether the local primary school gets some new equipment but not on how much tax they pay, how many hours a week they work or when they can retire.

Granted, EU nationals (who have been here over five years) could go through the arduous process of applying for French nationality if they really wanted the right to vote, but is that really necessary?

Do you really need to become French to have get your say in how the country you call home will work in future? 'Freedom of movement should come with voting rights'

Surely there’s a way it can happen without all the paperwork, if there's a will.

The issue has been the result of campaigns in the past, notably the European Citizens’ Initiative “Let Me Vote” which pushed for EU citizens to get voting rights in national elections.

Philippe Cayla, the head of TV station Euronews and who founded Let Me Vote, told The Local previously “We have talked about EU Citizenship, but what does it mean to be an EU citizen if you live in a different country and you don’t have the same rights as everyone else? EU citizens in each country should be equal.

“You can’t have an open market and encourage freedom of movement without ensuring voting rights,” he added.

But it’s not just about EU citizenship, having the right to vote in the French elections would be invaluable in helping to boost integration and a sense of belonging in their adopted country.

The idea has some political in France support including from Jean-Christophe Lagarde the head of the centre right UDI party who is in favour of EU citizens being able to vote in the national parliamentary elections, but not the presidential one.

He told The Local previously that the current situation “can’t go on”.

“EU nationals in France are considered citizens at a local level, because they have the right to vote but at a regional or national level they are no longer citizens.

“So they have a say in how primary schools are run, because that comes under the remit of a local mayor, but once their child goes to a collège or a lycée, these EU nationals have no say in what happens.

“They are only citizens in France from time to time, but it shouldn't work like that.”

Of course it shouldn't just be EU citizens living in France? Why not Americans or Chinese or Brits when the UK does leave the EU? The fact it would need to be reciprocal makes it easier in the EU in theory. But bilateral agreements could be possible.

But it's unlikely to be a popular idea in France where the subject of giving votes to foreigners even in local elections has been a thorny issue for decades now.

Many French people don’t seem to be sympathetic to the idea of paying taxes in a country should mean the right to vote.

And they are right. We can’t just be expected to get off the ferry, get a job and then go straight to the polling booth. (The French parliament. Shouldn't we have a say on who is elected here?)

Flavien Neuvy a right-wing French mayor, put it like this: “Paying taxes = right to vote? Really?

“This is absurd. Our republic works on the simple principle of a sovereign people. It is the French people who elect their representatives. Granting voting rights to foreigners is to abandon a part of that sovereignty. It is ill advised.”

Abandon sovereignty? Really? Or would extending voting rights simply enhance it while at the same time give EU citizens a greater stake in their new home and help bridge the gap between them and the locals?

Of course it’s unlikely to happen, given that it would be complicated and the move would need to be reciprocal. The French living in London or Berlin also deserve to vote in national elections.

But this is probably an unpopular idea at a time when Europe appears to be becoming more fractured than united.

There are also many foreign citizens living in France who would still prefer to be able to vote in their home country rather than in France.

While some still have that right, many British citizens who have been out of the country for 15 years or more (although the law is set to change) and all Irish expats do not.

Perhaps the only option really is to take French nationality.

But there are other ways it could work. (See link below)

Giving EU citizens right to vote in the French election: Seven ways it could work