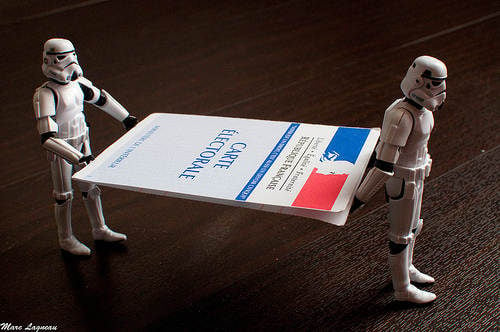 Bearing in mind we think long-term EU citizens living in France should get to vote in the French presidential election, here are some ways that France could make it happen.

Rather like the system many countries employ for their naturalization process, EU nationals could be put through a language test or a cultural quiz to assess how integrated they are into the life and culture of their adopted country.

If EU citizens in France want to vote in the presidential election, they may have to improve their French language ability and knowledge of French cinema and literature. If we really stick to the slogan “No Taxation without Representation” then one way of allowing EU nationals to qualify to vote in France could depend on how long they have paid their taxes into the French system. If an Irishman has had a CDI (permanent contract) for a certain amount of time, let's say three years, then he could register on the electoral role.

3. Give them the choice

One argument put forward by Tony Venables formerly of the European Citizenship Action Service is to give EU nationals the choice. You either vote back home in your country of origin or you vote in the country where you live.

The most obvious solution appears to be to restrict the right to vote to those who have lived in the country for a certain amount of time. Those stepping off the Eurostar in Gare du Nord should not be expected to vote before they have unpacked says French deputy Jean-Christophe Lagarde.

“In six months you don't really have time to become a citizen,” he said. But anyone who has been here for at least five years, he says, should be allowed to vote. 5. Vote in both countries

There are some who argue that expats will always have a vested interest in the country they are from no matter where in the world they live. And obviously they have an interest in the country they live, so EU nationals who have gone abroad should be rewarded for their boldness and commitment to the European project by being given the right to vote in the national elections of both countries. They would effectively be Euro supercitizens.

Perhaps the most sensible but most complicated system would see EU citizens allowed the right to vote in the country of origin until they have lived in another country for a certain amount of time, after which their voting rights switch to their new country.

This would avoid the problem of the Irish and Danes, who are barred from the electoral role as soon as they leave the country, being disenfranchised until the five year limit comes in. There are those who still believe the solution should only come through naturalisation, for example if a German national becomes a French citizen. This is better for integration, they say. But the current process is lengthy EU citizens need to have been in France for five years, so those in favour of naturalisation argue it needs to become much easier for EU citizens to go through the process, or most will never bother.

You decide. What solution is the best?