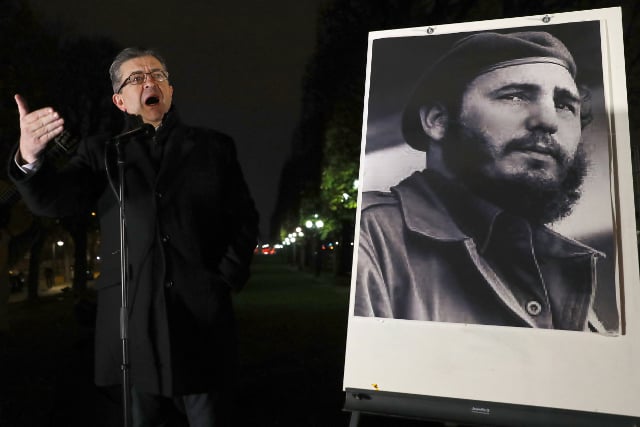 France's Communist-backed presidential candidate Jean-Luc Melenchon came under attack from his rivals on Wednesday as
yet another poll showed voters warming to the firebrand leftist, whose late surge has caused ripples in financial markets.

In the past few weeks the 65-year-old eurosceptic has moved behind to become a serious contender in an election shaping up as a four-way race along with far-right leader Marine Le Pen, centrist Emmanuel Macron and conservative
Francois Fillon.

While Le Pen and Macron are still seen as frontrunners for the April 23 first round, Melenchon is now only about five points behind them, after overtaking conservative Francois Fillon in two opinion polls.

An Ifop Fiducial survey Wednesday showed the leader of La France Insoumise (Unbowed France) movement becoming the country's favourite politician, with 68 percent of the French approving of him, up 22 points in a month.

While the man famous for his fiery speeches promises he has mellowed, his plans for a 100-percent tax rate on top earners and threat to exit EU treaties if Brussels does not agree to a fundamental overhaul of the bloc have caused
trepidation among investors.

On Tuesday, the gap between the yields on French 10-year bonds and German Bunds widened to 75 basis points, just shy of a four-year high of 77 points seen in late February when investors began factoring in the prospect — seen
as improbable but not unthinkable — of a Le Pen win.

“A recent surge in support for euroskeptic candidate Jean-Luc Melenchon is bringing “Frexit” fears back to the fore,” the popular MarketWatch site tweeted.

Others have compared him to Cuban revolutionary Fidel Castro.

Reviewing the leftwinger's plans to tax all earnings of above 400,000 euros at 100 percent and increase public spending by 173 billion euros ($184 billion) over five years, the paper warned: “Ruined by Mr Melenchon, France could be quickly forced to import its wine and cheese.”

The rise of Melenchon has further shaken up a rollercoaster campaign and brought him closer to his dream of a duel with his nemesis Le Pen and rival for the anti-establishment mantle.

Like Le Pen, Melenchon wants to restore protections for French industry and develop closer ties with Russia but he is fiercely opposed to her anti-immigrant agenda.

On Wednesday, President Francois Hollande, who has watched his Socialist party's nominee Benoit Hamon be overtaken by Melenchon, warned voters against being taken in by the latter's rhetorical talents.

“There is a risk of simplification and falsification, whereby we watch the showman instead of his programme,” Hollande was quoted by French media as saying.

On Tuesday, Macron and Fillon also tore into the indefatigable Melenchon, who attracted tens of thousands of supporters at a rally in the Mediterranean port city of Marseille on Sunday.

The 39-year-old Macron sought to portray the former Socialist minister, who quit the ruling party in 2008, as a relic of a bygone era.

“The Communist revolutionary was a Socialist senator way back when I was in secondary school!” he told a rally.

Fillon painted Melenchon and Le Pen, who wants to bring back the French franc and put France's EU membership to a vote, as two sides of the same coin.

Neither would “get the French economy up and running again”, said the ex-premier who is campaigning as a safe pair of hands but has been dogged by an expenses scandal.

“We're at a historic moment in our country,” Gattaz told a press conference on Tuesday, declaring that a hypothetical run-off between Melenchon and Le Pen would force the French to choose between “economic disaster and economic chaos”.