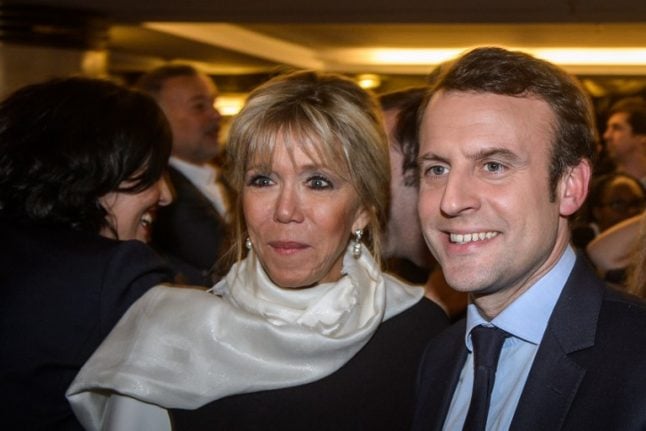 All photos: AFP
It's no secret that Emmanuel Macron – who as things stand is likely to be the next president of France – married his high school teacher. (Read a lot more about it here).
Indeed, as the story goes, Macron fell in love with his French teacher Brigitte Trogneux despite fact that she was 24 years older, married, and a mother of three (and his teacher, of course).
The two got married some 14 years later, giving France plenty of time to get used to it to the unusual relationship.
But a new book, by Le Figaro journalist Anne Fulda, gets into the nitty gritty about how Macron's family reacted to it all in the early days.
And it appears that Macron's family was a little slow on the uptake at first, figuring out that he was in love, but not realizing with whom. In fact, they thought it was a girl in the class, most likely Laurence Auziere, who is actually the daughter of Trogneux.
How wrong they were. Macron, just 16 years old at the time, was in love with his 40-year-old teacher and wound up telling his parents.
“They were thinking that it would stop and did everything to make that happen,” Macron said, according to the new book.
“I don't know how I'd have reacted to it all myself,” he added.
And his parents didn't take the news lightly, asking Trogneux to keep away from their son, at least until he was 18 years old.
She replied: “I can't promise anything”.
Macron's mother said: “You don't realize it, but you've had your life, he hasn't… he wont be able to have children with you”. It was soon after this that Macron went to Paris to seek his fortune, promising his teacher “I will come back and marry you”.
Upon his return to Amiens in northern France two years later, he told his mother: “I still love Brigitte, if you understand that then all the better, because if not I am going not going to stop”.
Apparently with little say in the matter, Macron's parents accepted the pair as they were, and they were married in 2007.
Macron's mother since said that she sees Trogneux “more as a friend than a daughter-in-law”.
If the current polls are anything to go by, this daughter-in-law, grandmother, wife and ex-teacher will soon be able to add First Lady of France to her list of titles.
France goes to the polls on April 23rd and again on May 7th when Macron is predicted to face off against Marine Le Pen.
The new book is called Un jeune homme si parfait “A young man, so perfect”. Find it here (in French).
READ ALSO: From teacher to lover to France's next first lady? Meet 'Madame Macron