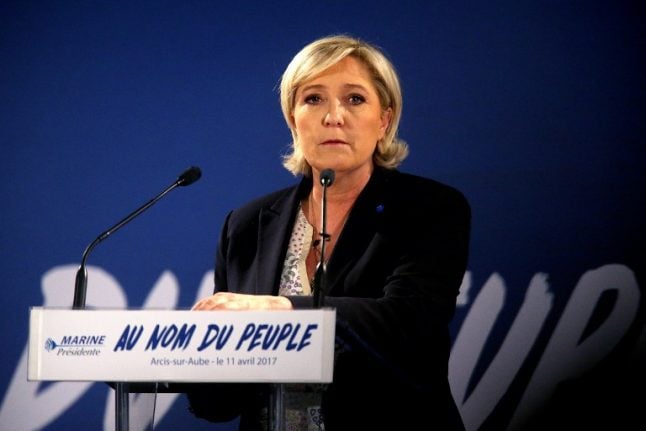 Photo: AFP
Le Pen, who caused outrage at the weekend with controversial remarks about the deportation of Jews from wartime France, also said she would move quickly to hold a referendum on her proposals for a French-first policy on jobs and social housing.
The anti-globalisation, anti-EU National Front (FN) leader is neck-and-neck with centrist Emmanuel Macron in polls for the first round of the election on April 23, with three polls Tuesday putting them on 23-24 percent each.
Conservative Francois Fillon and surging leftist radical Jean-Luc Melenchon are locked in a close contest for third with between 17 and 19 percent each.
The two top vote-getters go through to a runoff on May 7.
If she prevailed, Le Pen says she will give herself six months to negotiate a partial dismantling of the EU, failing which she says she will organise an in/out “Frexit” referendum.
On Tuesday, she said she would not wait until then to reinstate border controls.
“Every second of my presidency will be useful to France and the French,” she said in a video setting out ten measures she would take in her first two months in office.
They included reducing the minimum retirement age from 62 to 60, stripping dual national citizens convicted of jihadist links of their French nationality and lowering income taxes.
Le Pen did not say how she would get them passed within two months. After the presidential election France will hold a general election. The new parliament will only sit for the first time on June 27 — a month and a half after the new president takes office.
On Sunday, Le Pen drew fire for saying she did “not think France is responsible for the Vel d'Hiv”, referring to the roundup by French police of more than 13,000 Jews in 1942, most of whom were deported to Auschwitz.
The remarks were seen by some as a reminder of the FN's anti-Semitic past.