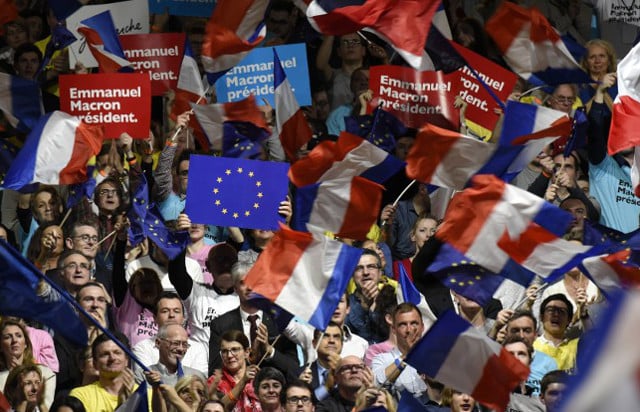 All photos: AFP
They're of all ages
Given Macron's own age (at 39 he is the youngest candidate by ten years) he's not quite the candidate for young people that you might imagine.  According to a February Ifop study, his voters are fairly evenly spread across the ages.
Some 22 percent of those who intend to vote for him are under the age of 35, but another 22 percent are in the 65 and over age category. Both the age categories in between come in at 19 percent.
“It's true that he's not as strong as Marine Le Pen among young voters but he is much stronger than her among older generations,” Edouard Lecerf from the polling institute Kantar Public told The Local.
READ ALSO: Who are Marine Le Pen's voters?
They're upper middle earners

Photo: Ifop
The former Rothschild banker is often criticised for being the candidate of France's intellectual and business elites. This seems to be at least partly true according to Ifop.
While 26 percent of those who will vote for him do have senior management and higher intellectual professions, middle income earner also represent another 26 percent of his voters.
And he has less business support than you might think, with only 18 percent of business executives among those who say they would vote for him.
French political expert Bruno Cautres from the Cevipof institute spelled it out in more simplistic terms.
“Macron's electorate are the French that are doing well,” he told The Local. “They have a good education, good jobs and good opportunities and have optimistic views about the future.
“They are from the France that has not suffered because of inequalities.”
Macron cannot really lay claim to being the candidate of the people, with 18 percent of low salaried employees and only nine percent of manual labourers in his voter base.
Kantar Public's Lecerf added: “Macron has strong support in the middle and upper income groups whereas Marine Le Pen is much stronger among the lower wage groups.
An OpinionWay poll also showed Macron as winning among entrepreneurs, with 32 percent support.
In the second televised debate Macron said he wanted to help entrepreneurs.
They're educated

Photo: Ifop
It's clear that Macron's potential voters come from the higher-educated end of the scale. Only 17 percent of his supporters didn't receive high school (bac) qualifications whereas 29 percent continued studying for at least two years after high school according to the Ifop study.
Education among Macron and Marine Le Pen's voters mirror each other in that as level of education goes up, generally so does support for Macron, whereas the reverse is true for Le Pen. They live in politically moderate regions
The three regions named in a February Ipsos survey as Macron strongholds are Brittany (27.5 percent support), Pays de la Loire in western France (25 percent support) and the Paris region Île-de-France (24.5 percent).
These areas are that are traditionally politically moderate regions.
However it's harder to map Macron's voter bases, unlike Marine Le Pen who has clear strongholds in the former industrial north of the country and the south, where her National Front party was formed from settlers returning home from Algeria.
(Some of them) are Socialist Party converts
Macron bills himself as a centrist candidate, neither of “the left nor the right.”
But he has fairly strong support from the left; 45 percent of those who align themselves with the socialist party said they could vote for Macron, according to the Ipsos study.
As the French election has two stages ending with a runoff between only two candidates, the final result largely relies on swaying voters from other political parties. They're engaged in the election
En Marche! supporters are the most engaged in this election. According to an April survey by Ipsos, 68 percent are very interested in the election, higher than any other party.
And 79 percent intend to go and vote, compared to national average of 66 percent.
They're more certain but could still waiver
Previous polls have shown Macron supporters to be unsure of whether their vote could still change, but the April Ipsos survey showed his supporters have doubled in their certainty, from only 33 to 61 percent.
Still far behind Le Pen's 82 percent certainty score.
But 85 percent say they are certain they will vote for him should he face off with Marine Le Pen in the final round. They're voting for his personality, ideas and his chances of winning
The top reason given for wanting to vote for any of the candidates was their ideas and policies, according to the Ipsos study.
Known for his slick presentation and charm, Macron also scored higher than any other candidate for his personality as a reason to vote for him, as well as his chances of winning.
“Ideologically the profile of a Macron voter is someone who believes globablization and European integration is not bad for France,” Cautres said.
“What explains Macron's support is the broad feeling among his voters that 'we need someone new who is not like the others.
“If it comes down to a runoff between Macron and Le Pen it will be a battle of optimism versus pessimism,” he said.
By Rose Trigg/ Ben McPartland