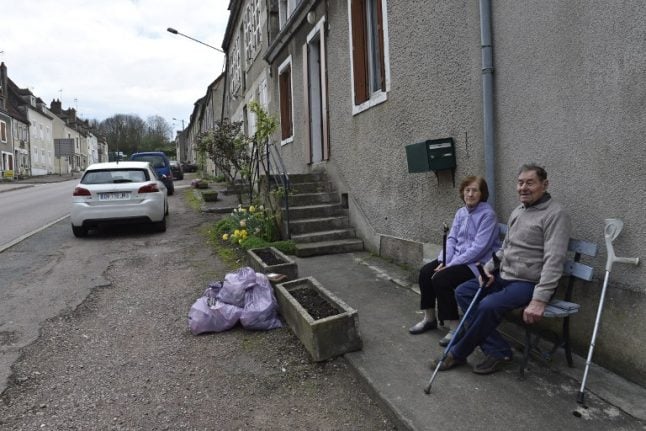 All photos: AFP
With its deserted streets, “For Sale” signs and weeds pushing through the pavement, the village of Varzy symbolises the plight of the depressed French hinterland, a key theme in the presidential race.
Standing at the counter in one of two bars left in the central village of around 1,300 people, truck driver Michel Cadour counts off the restaurants that have closed in recent years.
“There is nothing left here,” the ruddy-faced 58-year-old said with a resigned air. “Young people don't want to start anything because there are no customers. Nowadays the only restaurant that opens in the evening is the kebab shop.” The fate of provincial towns and villages looms large over France's April 23-May 7 election, with voters in areas scarred by population decline and shrinking public services threatening to take revenge on mainstream politicians.
France's countryside, provincial towns and the area between town and country are estimated by geographer Christophe Guilluy to contain 60 percent of the population.
Traditionally rural areas in France have voted for candidates on the right, but many are now leaning towards the far-right.
For Pascal Perrineau, a political scientist at Sciences Po university, the French election, like the US vote which brought in President Donald Trump, has revealed a rift between rural communities and the cosmopolitan cities.
“If you go 20 kilometres (12 miles) north, south, east or west out of Paris you will find yourself in another France, which is far more immobile, hit by unemployment, worried about identity and marked by social and cultural divisions,” he told a group of foreign correspondents in Paris.
Far-right presidential candidate Marine Le Pen, who is running neck-and-neck with centrist Emmanuel Macron for the first round vote, according to opinion polls, has campaigned as the champion of the “forgotten French” against the “globalist” elite.
“I support Marine. She is the only one we haven't tried,” Cadour said, sipping on a beer.
“Mainstream politicians don't care about rural voters. They're too busy looking after their interests in town,” he said. Medical malaise
A shortage of doctors, which affects parts of Paris also but is most acute in central France, has come to symbolise the malaise of the rural dweller.
Situated in the Nievre department, which has lost over a quarter of its general practitioners since 2007, Varzy has struggled to attract young physicians, put off by the isolation and large caseloads of the country doctor.
From four a decade ago, the number of GPs in Varzy has fallen to two. Patients also complain of long delays to consult ophthalmologists, gynaecologists and other specialists.
“The politicians don't realise how people live. People here can't get proper care,” said Antoine, a 52-year-old former soldier who gave up trying to see a cardiologist about a heart problem after being told he would have to wait four months.
“We don't just have a medical desert in France. We have a real political desert,” said the burly security guard, expressing tentative support for the “clearsightedness” of the maverick Macron.
'Lost bond'
Pascal Gleitz (pictured below, left), a doctor who worked for 20 years in Varzy, blamed the sense of abandonment in rural areas on cutbacks in public services.
Citing the closure of many village post offices, the silver-haired physician said: “Before, there was a very strong bond between the state and the population. That has been lost.” In Nevers, the region's administrative centre where he now practises, Gleitz manages to see all urgent cases within 24 hours.
But the longtime Socialist stronghold of 37,000 people also struggles to attract doctors and other professionals.
The population of the picturesque town on the Loire river has fallen by more than 10,000 in the past 20 years and the once buzzing centre has been abandoned by shoppers for out-of-town supermarkets and malls.
On a walkabout of the town, estate agent Jerome Coquin pointed out the fake storefronts depicting thriving businesses painted by the city over shuttered shops.
While acknowledging that there was “no miracle solution” for towns lacking the attractions of big cities or the country, he expressed frustration at the lack of decentralisation in France.
“There's Paris and the big cities — and there's the rest,” the 39-year-old local grumbled. To Mayor Denis Thuriot, what matters most to voters in an area where the late Socialist president Francois Mitterrand took his early political steps for the top job “is that they are given proper consideration”.
“They believe that a lot is being done for big cities and rural areas and that no one is looking after the space in between,” said the former Socialist who won office in 2014 on a cross-platform list.
Like his favoured candidate Macron, Thuriot believes that the digital economy is key to attracting investment.
He also shares the ex-banker's prediction that the French will avoid extremes in the run-off round of the election that is expected to pit Macron against Le Pen.
“I'm convinced that the majority of the French are moderates deep down,” he said.
SEE MORE from our election section here

By the AFP's Clare Byrne