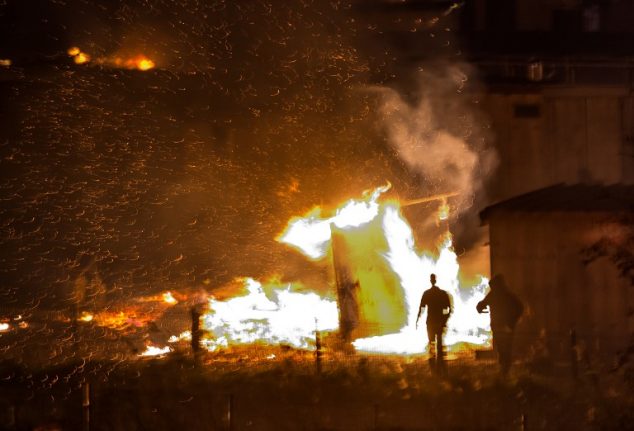 All photos: AFP
Firefighters said at least 10 people had been injured in the blaze at the camp, which was home to some 1,500 people, mostly Iraqi Kurds, living in closely packed wooden huts.
“There is nothing left but a heap of ashes,” Michel Lalande, prefect of France's Nord region, told reporters at the scene as firefighters continued to battle the flames which were visible from several kilometres (miles) away.
“It will be impossible to put the huts back where they were before.” The fierce blaze destroyed most of the 300 huts in the camp and had still not been extinguished at 2am Tuesday.
The migrants were evacuated and would be rehoused in emergency accommodation, the prefect said, adding that the Dunkirk suburb of Grande-Synthe had already made two gymnasiums available.
Lalande said the blaze had been started after a fight on Monday afternoon between Afghans and Kurds at the camp that had left six injured with knife wounds.
“There must have been fires deliberately set in several different places, it is not possible otherwise. It seems that it is related to fights between Iraqis and Afghans,” said Olivier Caremelle, chief of staff of Grande-Synthe mayor Damien Careme, an environmentalist who supported the building of the camp last year.
“What I can see for myself is that everything has burned down. There is a communal kitchen and the information point, but it's impossible to walk through the camp and get a really accurate idea of   the extent of the damage,” Caramelle said.

A huge fire tears through the Grande-Synthe migrant camp outside the northern French city of Dunkirk https://t.co/9298zhzDzj pic.twitter.com/tEy6lJyqeB

Plans to dismantle camp
Fights between the migrants continued after midnight, with riot police struggling to contain them and occasionally being pelted with stones, according to an AFP correspondent.
“No one is able to explain how these events could have happened,” said Lalande.
The population of the Grande-Synthe camp has swelled since the destruction last October of the squalid “Jungle” camp near Calais, about 40 kilometres (25 miles) away.
According to several witnesses, disagreements arose after an increase in the number of Afghans who arrived from the “Jungle” camp. The Afghans were apparently unhappy at being put up in the communal kitchens while the Kurds slept in chalets.
Their arrival had increased tensions, according to Caremelle.
There have been several violent incidents at the Grande-Synthe camp, with police intervening last month after five men were injured in a fight.
Another man was stabbed in November.
French officials had said in mid-March that security forces were planning to start dismantling the camp following clashes at the site.
The camp, built by the humanitarian group MSF (Doctors Without Borders), opened in March 2016 over the objections of the central government.
For more than a decade France's northern coast has been a magnet for refugees and migrants trying to reach Britain, with French authorities repeatedly tearing down camps in the region.
Migrants gather along the northern coast in France seeking to break into trucks heading to Britain or pay smugglers to help them get across the Channel.
The issue is a constant source of friction between Britain and France and an embarrassment for the French government, which has been criticised by the United Nations refugee agency for failing to provide adequate accommodation.
Url copied to clipboard!