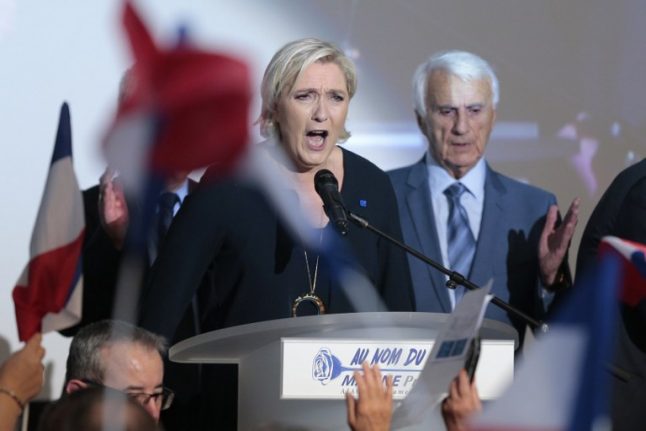 Photo: AFP
Former President Jacques Chirac and current leader Francois Hollande have both apologised for the role French police played in the round-up of more than 13,000 Jews at the Vel d'Hiv cycling track which was ordered by Nazi officers in 1942.
But Le Pen told the LCI television channel on Sunday: “I don't think France is responsible for the Vel d'Hiv.”
She added: “I think that generally speaking if there are people responsible, it's those who were in power at the time. It's not France.”
The leader of the National Front (FN) party said France had “taught our children that they have all the reasons to criticise (the country), and to only see, perhaps, the darkest aspects of our history”.
“So, I want them to be proud of being French again,” she said.
Ahead of the first round of France's highly unpredictable presidential election on April 23, Le Pen's centrist rival Emmanuel Macron said her comments were “a serious mistake”.
“Some had forgotten that Marine Le Pen is the daughter of Jean-Marie Le Pen,” Macron told BFMTV.
Le Pen Senior, who founded the FN in 1972 and is estranged from his daughter, has been convicted repeatedly for anti-Semitic and racist comments such as calling the Holocaust a “detail of history”.
“We must not be complacent or minimise what the National Front is today,” Macron said.
'Insult to France'
The CRIF umbrella grouping of French Jewish organisations and the Jewish students' union (UEJF) both blasted Le Pen for the comments, describing them as “revisionist”.
“These remarks are an insult to France, which honoured itself in 1995 by recognising its responsibility in the deportation of France's Jews and facing its history without a selective memory,” the CRIF said.
Chirac's Socialist predecessor Francois Mitterand had refused to acknowledge responsibility for the deportations, saying in 1994: “The republic had nothing to do with that. France is not responsible.”
Le Pen defended her broadcast comments in a statement issued late Sunday.
“I consider that France and the Republic were based in London during the (Nazi) occupation,” she said.
The British capital was where Charles de Gaulle, the leader of the free French forces, lived in exile during World War II while France's Vichy regime collaborated with Nazi Germany.
“The Vichy regime was not France,” Le Pen said in her statement, describing the wartime authority as “illegal”.
She added that this in no way exonerated those who participated in “the vile roundup of Vel d'Hiv and all the atrocities committed during that period”.