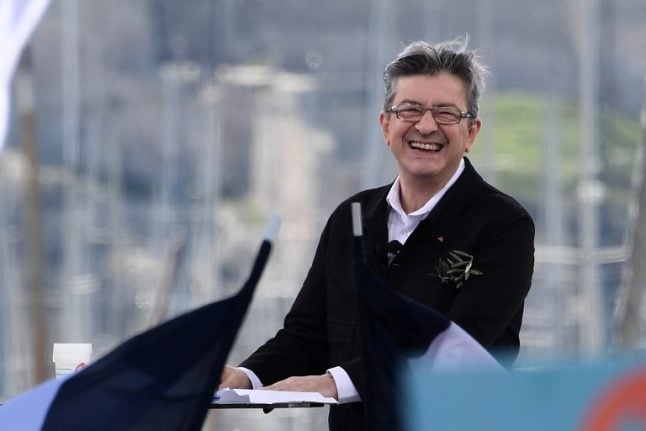 All photos: AFP
1. Who is he?
He's a 65-year-old veteran politician who quit the Socialist party after 30 years in 2008 and is now head of his own movement “La France Insoumise” (Unbowed France).
Long known for being aggressive and acid-tongued, he has toned down his rhetoric for this campaign but is still able to deliver a zinger or a witty putdown when required.
“I'm becoming a reassuring figure,” the divorced father-of-one told the Journal du Dimanche on April 2nd. “I'm less of a hothead.”
After refusing an alliance with Socialist candidate Benoit Hamon, he appears now to have eclipsed him as the main voice on the left.
“He invented political stand-up. He's become a showman,” according to a former colleague in the Socialist party Julien Dray.
Mélenchon ran for president in 2012 and won 11.1 percent of the vote, lower than polls had forecast. 2. How popular is he?
Well, an April 19th poll shows him at joint third with 19 percent alongside the Republican Francois Fillon… so he's proving to be pretty popular indeed (and is on a serious run).
Left-leaning news magazine L'Obs commented on Sunday that “the sudden emergence of Jean-Luc Mélenchon among the four candidates with around 20 percent has shattered all the predictions, (and) is sowing doubt among the favourites.”
3. Why is he so popular?
His climb appears linked to strong performances in two televised debates on March 20th and April 4th during which he delivered some memorable soundbites, particularly when clashing with far-right leader Marine Le Pen.
“Leave us alone with your religion!” he shouted at her last week at one point.
In an election marked by high levels of anger and people wanting to kick out the established political class, he has emerged as a charismatic alternative to Le Pen and the other “outsider”, pro-business independent Emmanuel Macron.
From the beginning of the campaign, he has also built up a loyal core of supporters on Twitter and via his own YouTube channel — a way for him to circumvent the traditional media, which he accuses of being biased.
In a sign of nervousness, Macron supporters spread an online video over the weekend highlighting Melenchon's tax plans while party secretary general Richard Ferrand urged voters to delve into his radical programme.
Bonus trivia: Mélenchon is the only candidate whose hologram shows up at rallies across the country, as first evidenced when he gave a simultaneous speech in Lyon and Paris. 4. How leftwing is he?
He's backed by the French Communist Party, is an admirer of late Venezuelan president Hugo Chavez and has a huge tax-and-spend economic programme.
He has also compared German Chancellor Angela Merkel, current President Francois Hollande's closest ally, to war-mongering Prussian statesman Otto von Bismarck.
“I'm the candidate for peace,” he said on Sunday with an olive branch in his jacket pocket. 5. What does he want for France?
He wants to reduce France's working week to 32 hours from its current 35 hours and lower the retirement age back to 60.
He proposes increases in the minimum wage and social security payments paid for in part by greater taxation of the rich. Any earnings beyond €33,000 a month would be taxed at 100 percent.
He wants to quit nuclear power, which produces around 75 percent of France's electricity, and renationalise the partly-privatised national power group EDF. In foreign affairs, he wants to pull France out of the market-friendly European Union as well as the Western military alliance NATO, and he has supported Russia's military action in Syria and Ukraine.
One of his signature domestic proposals is constitutional reform. He wants to scrap the existing powerful executive presidency and return France to a parliamentary system.
He wants to legalise cannabis and welcomes immigration.
“Today as yesterday, I am delighted that France is a mix of races and all the children are our children,” he said on Sunday.
SEE MORE from our election section here