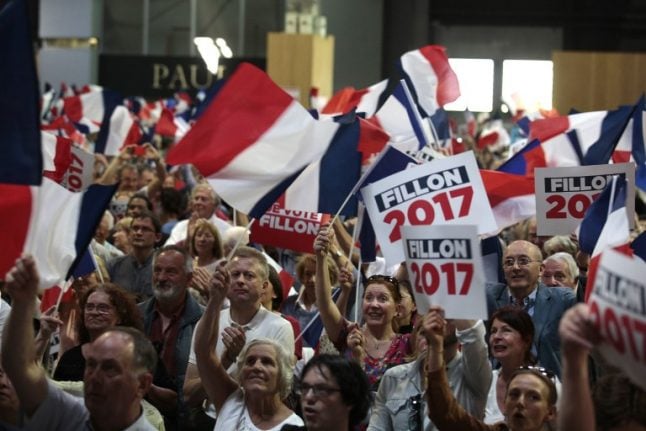 Photos: AFP
“We will win! We will win!”
So went the chant at the Porte de Versailles in southern Paris on Sunday afternoon, where thousands turned up to see presidential hopeful Francois Fillon speak to the crowd.
The crowd numbered 25,000 according to Fillon's team, some 5,000 more than expected.

Could Francois Fillon become president? His supporters are convinced the answer is yes. pic.twitter.com/tL57wReZm2

And the supporters haven't given up on the rightwing ex-prime minister just yet, despite the fact that his campaign has been mired by allegations his wife earned hundreds of thousands of euros for a fake job as a parliamentary assistant.
“Yes, I think Fillon will win. He is gathering steam right now and so French people are behind him,” a 25-year-old school worker called Marion told The Local.
“He's more of a president than any of the other candidates and he has the experience.”
The 61-year-old is going on the offensive with just 14 days left until the first round of the presidential election, in which he is currently predicted to finish in third place, behind liberam Emmanuel Macron and the far right Marine Le Pen, thereby not making it to the decisive second round.
During the rally, Fillon kept up his attacks on election favourite Macron, painting him as the continuation of unpopular Socialist President Francois Hollande, whom Macron served for four years as advisor then as economy minister.
“France would be the big loser: another five years of half-measures, another five years of missed opportunities,” he said to cheers.
SEE ALSO: Why embattled Fillon still believes he can be the next president of France But time is running out for Fillon – and it's no secret.
“If he doesn't rise a few points (in the polls) this week, it's over,” one
former minister and Fillon ally admitted to AFP on condition of anonymity.
But who can trust the polls? They've proven unreliable in the past, and several Fillon supporters told The Local on Sunday that they weren't interested in the figures.
And on a beautiful spring day, just the fact that thousands would prefer to spend it crammed inside a Paris exhibition centre than outside spoke volumes for Fillon's appeal.
The mood was upbeat and positive. Hundreds waved the Tricolore French flag, and the crowd was quick to boo at the mention of Marine Le Pen or Emmanuel Macron. Malaika, a 28-year-old project manager in communications, is a member of the Fillon youth group.
“Fillon will win. People who vote right are very loyal and they want change.
Macron is just a continuation of Francois hollande. Marine le Pen is a racist. French people are tolerant but they need hope – and the national front doesn't offer and hope. It's just hopeless people who vote for her.
The woman was one of many who told The Local that they planned to cast a blank vote if Fillon didn't make it to the second round.
“You have to understand that it's not possible for me to vote for Macron and it's not possible for me to vote for Le Pen,” she said. “If it's Le Pen that France wants then so be it.”
SEE ALSO: Does the French presidential election hold one last shock? Others weren't so loyal.
Quentin, a 22-year-old business student, said that both Fillon and Macron were “interesting candidates”.
“I'm still not sure who to vote for, but it won't be Le Pen in the second round. Fillon has a realistic programme for business and France needs to think of its economy.”
Etienne, a 70-year-old retiree, was on hand to support Fillon, but was well aware that the rightwinger wasn't a shoo-in for the second round.
“I'm not sure that Fillon will win, how can we know?” he said.
“If it comes to it, I'll vote for Macron in the second round. But there are tens of thousands of people here today, and it's clear that they don't care about things like scandals. It's not important. That's just the left stirring things up.”
“In England you had luck with Thatcher. Now it's our turn.”
The French head to the polls on April 23rd.
SEE ALSO: Nine things to know about Fillon – the French Thatcher