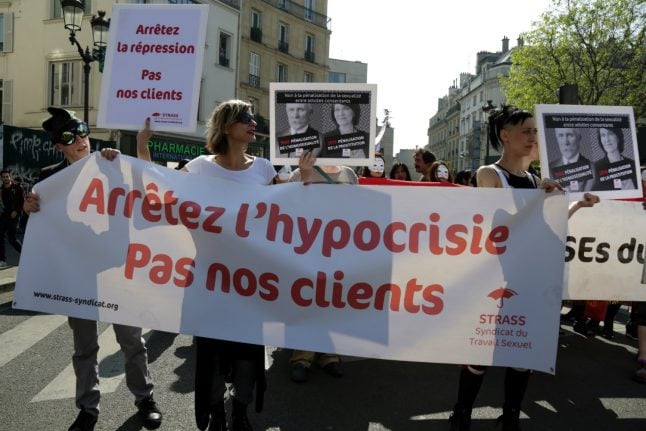 Participants hold a banner reading 'Stop the hypocrisy - not our clients' during a demonstration for the rights of sex workers in Paris. Photo: Zakaria Abdelkafi/AFP

The protesters, mostly young women but including some men, held up banners saying “Stop the fines, our aggressors, AIDS, repression and hypocrisy not our clients”.

The law, which can see fines of up to 3,750 euros imposed, was an attempt to criminalise customers rather than sex workers.

Many of the demonstrators wore white masks or make-up and carried placards which read “Sexwork is work”.

The march began in the Place Pigalle, in an area long-known for prostitution, with participants chanting slogans including “clients penalised, whores murdered”.

Prostitution is legal in France, though soliciting or running a brothel are not.

The law criminalising the clients of sex workers has led to a reduction in the numbers seeking prostitutes, especially on the streets, Tim Leicester of the Doctors of the World group told AFP.

All European countries penalise pimping, but on April 6, 2016 France joined a group of countries, including Britain and Sweden, which punish the clients of prostitutes.

Sweden in 1999 became the first country in the world to make it illegal to pay for sex, in a bid to lower demand.