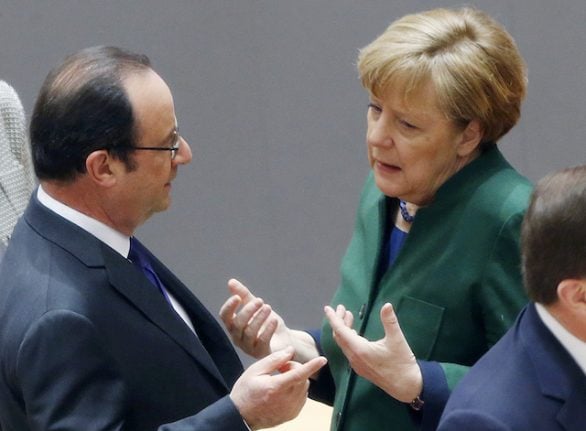 Francois Hollande and Angela Merkel (file photo). Credit: JOHN THYS/AFP
“After the chemical weapons massacre of April 4 on Khan Sheikhun in northwestern Syria, a military installation of the Syrian regime was destroyed by a US air strike last night,” the statement, issued after a morning phone call, said.
“President Assad bears sole responsibility for this development.”
“His repeated use of chemical weapons and his crimes against his own people call for sanctions, which France and Germany already demanded in the summer of 2013 after the massacre of Ghuta,” the site of another chemical weapons attack.
They added that “France and Germany, together with their partners and within the framework of the United Nations, will continue their efforts to hold President Assad responsible for his criminal deeds”.
Berlin and Paris “jointly call on the international community to join forces for a political transition in Syria in accordance with United Nations Security Council Resolution 2254 and the Geneva Communique,” they said, referring to a statement issued on June 30 2012 by the UN-backed Action Group for Syria.
Merkel and Hollande were each informed “one to two hours before the strikes,” a source close to the French president's office said.
Later Hollande said that the US response should now be followed up at an international level “under the auspices of the United Nations if possible.”
This could include tightening sanctions against Assad “preventing any further chemical attacks and the crushing by this regime of its own people,” Hollande said during a visit to southern France.
German Foreign Minister Sigmar Gabriel earlier said the strike was “understandable” after the UN Security Council was “unable to clearly and unequivocally respond to the barbaric use of chemical weapons against innocent people in Syria”.
His French counterpart Jean-Marc Ayrault, with Gabriel on a trip to Mali, said he hoped the strikes would show Syria's allies Russia and Iran that they should withdraw their support for Assad.
“The Russians and the Iranians must now understand that they cannot prop up Bashar al-Assad's regime… it cannot go on, it makes no sense,” Ayrault told France Info radio.