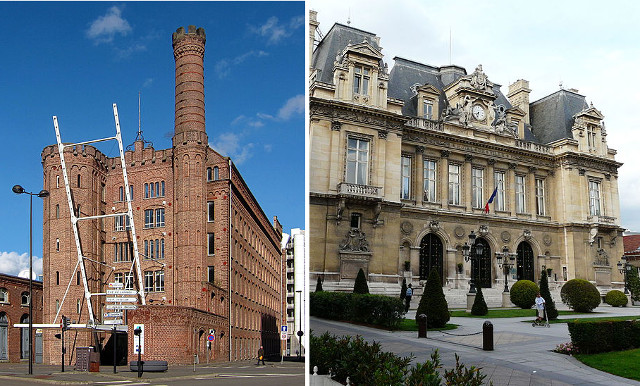 A factory in Roubaix, left, and the Town Hall of Neuilly-sur-Seine. Photos: WikiCommons

Roubaix, a town in France’s run-down industrial north, was ranked in a 2014 study as the poorest place in the country, with 45 percent of its residents living below the poverty line.

In the same study, the plush Paris suburb of Neuilly-sur-Seine was ranked at the other end of the scale, with only seven percent of residents living in poverty.

The two towns are worlds apart in terms of prosperity and The Local found the residents have very different views of the upcoming presidential election and who they would vote for.

(The map below shows Roubaix, near Lille in northern France, and Neuilly-sur-Seine beside Paris.) In Roubaix, a town on the Belgian border, the old beating heart of France's textile industry, the question was not which candidate voters would back, but whether they would vote at all. It’s easy to see why the town has been nicknamed “the capital of abstention”.

Many who The Local spoke with admitted to a serious disillusionment with the country, saying they felt their vote in the upcoming presidential election would make no difference to their future.

Sylvain Decobecq, a 36-year-old labourer, was among several who said they wouldn't cast a vote in April.

“I just don't think that any of the politicians actually want to do anything for us… I've never seen a president make France any better,” he said.

And it's no surprise they feel hard done by.

The most recent stats from Insee found unemployment has topped 30 percent in recent years compared to about 10 percent nationwide. Long gone are the glory days when the industries flourished in the north, with factories long since closed down.

A local youth association, Nouveau Regarde sur le Jeunesse, is so concerned about voter apathy that they will distribute 10,000 leaflets and organise a Facebook campaign urging local young people to turn out and vote.

With the presidential election around the corner, Roubaix is one of the many working class towns where the far-right Marine Le Pen is expected to woo disillusioned and hard-up voters. In France's 2015 regional elections Le Pen won more backing from Roubaix's voters (26 percent) in the first round than any other candidate.

“People in Roubaix don't think for themselves,” said the labourer Decobecq. “Le Pen just plays into the fact that things were cheaper, perhaps better, ten years ago and says she will fix it. And people want to hear that.”

Christophe Catteau, a 42-year-old security guard, said that while he won't be voting “because it won't change anything anyway” – his wife was among those who planned to pick Le Pen.

“She thinks Le Pen's programme is good. France has tried other parties and we've had no luck with them,” he said.

But the locals in Roubaix, once a bastion of socialism, are far from all having fallen under the spell of Le Pen, especially those who make up its large immigrant population.

Brahim Foudi, a 42-year-old who works as a gardener at the City Hall, says he will vote for “anyone but Le Pen”.

“She says she is going to create new jobs – come on, that's never going to happen. She is just targeting all the people in northern France who have no jobs and no choice,” he says.

“We have people in Roubaix queuing up for free food and they think everything will be solved with Marine Le Pen. They're wrong.”

Many voters in the town say they could not bring themselves to vote for François Fillon if the scandal-hit candidate ends up in the crucial run-off vote against Le Pen.

So even if many of Roubaix's voters don't back Le Pen, they could still boost her chances of victory by staying away from the ballot boxes.

The affluent north-western Paris suburb of Neuilly-sur-Seine, nestled between the capital and the skyscrapers of the La Defense business district, is a far cry from Roubaix.
Poverty rates are the lowest in the country, partly because it has one of the lowest percentages of social housing in the country and some of the highest property prices.
Politically, Neuilly-sur-Seine is a traditionally right-wing town with high political engagement. Only 11.83 percent of voters abstained in the 2012 election.
In the second round of the 2012 presidential election, some 84.2 percent of voters in Neuilly gave their support to the town's former right-wing mayor Nicolas Sarkozy.
The current mayor of Neuilly-sur-Seine is the pro-Fillon Jean-Christophe Fromantin, an entrepreneur who has made headlines with his staunch support of the embattled Republicans candidate throughout the Penelopegate affair. It's not just the mayor who is backing Filllon, a social conservative and proud Catholic who has been dubbed the “French Maggie Thatcher” due to his desire to “pull down the house and rebuild it” – in the same way the then British Prime Minister reformed the UK in the 1980s.
For many people The Local spoke to in Neuilly, especially the older population, Fillon is still the best man to take France forward and all talk of him paying his wife and children for alleged fake jobs mattered little.
“Fillon is the candidate to lead the country, it's obvious,” said 73-year-old retiree Xavier Rocques. “The Penelopegate scandal is a trumped-up affair,” he said.
Many in Neuilly believe Fillon, who is under police investigation, is innocent of any wrongdoing.
“It's old news, he's not the only person to hire his family, legally he's done nothing wrong” said Nathalie, 63. “He's got a good economic policy, the scandal hasn't changed anything at all.”
Sandrine, a 45 year old stay-at-home mother, says the more blasé attitude of her fellow Neuilly residents was down to their financial good fortune.
“It all depends on where you're born. If you're born into privilege, Penelopegate isn't a big problem for you,” she tells The Local.
“But for people who work hard for a pittance and have trouble making ends meet, it's a big sum of money that he's paid her. It's our money.” Currently Fillon is not predicted to make the crucial second round runoff, which opinion polls say will be between the far-right Marine Le Pen and liberal Emmanuel Macron.
There have been fears that Fillon voters, bitter about how the scandal has hobbled him, will plump for Le Pen in the second round, increasing the prospect that the anti-EU, anti-immigration National Front leader could become the next president.
But despite their right-wing allegiances, most residents The Local spoke to said they would not vote for Le Pen if Fillon didn't make the second round, and few had a good word to say about her.
“Anyone but Le Pen, I would even vote for Mélenchon!” Alexandre, 68, says, referring to the far-left firebrand Jean-Luc Mélenchon.
“What she's proposing would be a complete disaster for the economy, she's lying. It's like in the UK, with Nigel Farage and Boris Johnson, they make all these promises and the day after say 'sorry guys, we lied'.”
Her anti-EU position was a worry for some too. “She's crazy, without Europe what do we have? We have nothing in France at the moment,” said Laure Cheme, aged 68.
As for Macron, many in Neuilly were suspicious of the former Rothschild banker and economy minister.
“We don't know concretely what he stands for, he's never been elected. He has charm, he's handsome, intelligent, pleasant, but to lead a country you need more than that,” said stay-at-home mum Sandrine.
So while Roubaix in the north is plagued by voter apathy which may boost Marine Le Pen, those in plush Neuilly-sur-Seine on the edge of Paris their apathy is directed towards the scandal that engulfed their man François Fillon.
By Oliver Gee and Rose Trigg