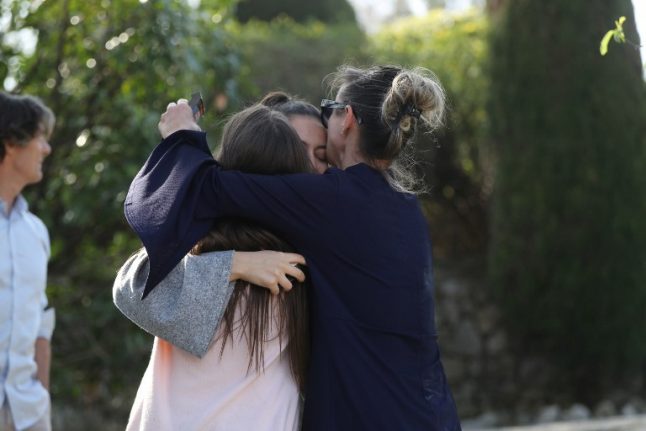 Pupils at the school soon after the shooting. Photo: AFP
The gunman wounded five in the Grasse high school attack on March 16th, including head teacher Hervé Pizzinat.
French Education Minister Najat Vallaud-Belkacem said that the “heroic” actions by Pizzinat – who reasoned with the gunman despite being shot in the arm – appeared to have helped prevent greater bloodshed.
The head teacher will return to the high school on Thursday for the first time since the shooting as he is decorated with the award, which will be presented by Christian Estrosi, the president of the Provence-Alpes-Côte d'Azur region.
Estrosi praised the head teacher's “extraordinary behavior” ahead of the ceremony, adding that the award was in recognition of “a bravery that is an honour to both the man and his educational team”.

Pupils told BFM TV that they will welcome their head with open arms.
“We're missing him at the school,” 19-year-old Ashraf told the channel.
“He's so nice, I'll be glad to see him again, and like everyone else, I'm going to be a little touched, a little emotional. I am going to thank him and tell him that he reacted well, and that we're proud of him.”

During the attack last month, the headteacher rushed towards the pupil as he pulled out his guns “to try to reason with him,” Vallaud-Belkacem said, adding that the educator was injured in the process. “We avoided the worst,” she said.
One witness, 17-year-old Thomas, told the Nice-Matin newspaper that the headteacher showed an “incredibly level head” during the ordeal.
“I was too far away to hear what he was saying, but he stayed calm, even after he had been hit by a shot,” the pupil told the paper.
“Even with a bullet in his arm he continued to be the voice of reason.”
Another pupil said that when pupils were running for their lives, Pizzinat remained at the scene trying to protect others.
The Legion of Honour is the highest French order of merit and was established in 1802 by Napoléon Bonaparte.
Url copied to clipboard!